Posted by DJkit Marketing – 5 years ago

In late 2010 Panasonic confirmed that it had ceased production of the legendary Technics SL 1200/1210 analogue turntables. The SL1200/1210 series has, without question, been one of the most important pieces of technology to shape the art of DJ'ing with a production run spanning over 35 years. It would be fair to say that many saw the discontinuation of this iconic product as the end of the vinyl era.

Over recent years the vinyl market has experienced something of a resurgence with vinyl only sets becoming a regular feature at many underground nights. This interest caused many manufacturers too not only continue the production of current models but actually create new turntable models, often with additional features to fulfil the needs of the digital turntablist generation.

Ironically, in April of 2014 Pioneer (the manufacturer whose CDJ range had helped to topple the 1210 as the playback platform of choice for DJs) showed the world that vinyl had indeed become cool once again with a sneak peak at the PLX-1000, a “concept” that might eventually make it to production. Following the huge response to the news the first batches of the PLX-1000 began to ship in August 2014. 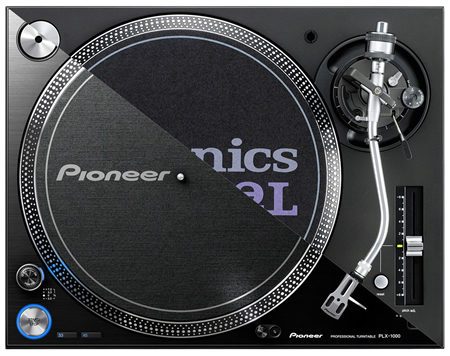 While the PLX-1000 shares a familiar layout with the SL1210 the Pioneer turmtable does have extra features including far superior acoustic dampening, wider pitch control and a higher torque than the Technics deck. As the PLX-1000 was designed for nightclub installation and professional DJ'ing it also offers far easier installation options including detachable power and phono cables compared to the 1210's rather inflexible fixed wiring.

The question many DJs ask us here at Decks is whether the Pioneer deck has captured the feel of the SL1200 or if the PLX really is a unique performance instrument. We're happy to report that both are true, the PLX-1000 feels like an old friend, albeit an old friend who has been going to the gym and is far healthier, snappier and more responsive. Pioneer clearly conducted thorough market research while developing the PLX - the hold 33 and tap 45 pitch bend trick still works, a secret weapon in the 1210 veteran's arsenal.

We should make you aware of the huge number of turntables that offer a wide range of options to turntablists and vinyl purists. Some will provide you with Technics features at around the same or slightly lower price points, for those who wish to digitise their vinyl collection many manufacturers have created turntables with the added benefit of on board analogue to digital conversion via USB and there are others, such as the Reloop RP-8000, which offer additional controls for the modern DVS performers.

We've rounded up some of our favourite turntables below and while we're sure that we've covered all bases if there's any questions that you have feel free to contact us here at Decks, we'll be happy to provide you with impartial advice to help you make the right choice.