Posted by djkit marketing – 3 weeks ago

What’s the difference between the Denon Prime 4 and SC Live 4? 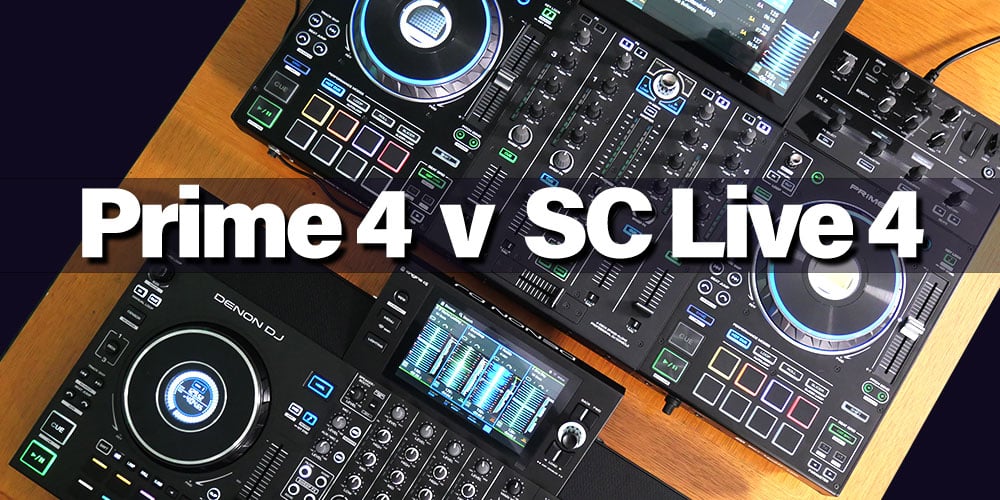 If you’re reading this, it's because you want to know which is better, what’s the difference or should I upgrade my Denon Prime 4 to the new SC Live 4.

To save you a read… the SC Live 4 is NOT replacing the Prime 4 and the Prime 4 technically, has more to offer. That’s a summary, so if you have a Prime 4, there’s no need to get gear envy, yours is still superior. If you’ve been thinking about getting a Prime 4, then depending on your use for it, this might be helpful.

Out of the box, the main differences are a larger, adjustable, screen, better in jog displays and more robust build on the Prime 4 and the SC Live 4 has built in speakers and connects to Amazon Music Unlimited. Let’s go through each section to cover the key differences.

Engine OS is now growing in popularity and these machines both have them installed and carrying all the same functionality. On board analysis, Wi-Fi, music streaming, recording, lighting control are the key features. There will be very slight differences in menus and display due to the different hardware on these two controllers.

Both have a 6 inch, touch sensitive jog wheel with a built in display. The Prime 4 has a high resolution display which can show artwork, custom logo and track information. The SC Live 4 is a more simplified LCD display show track time, deck selected and rotating track position. Another advantage on the Prime 4 is the illuminated outer ring which changes colour depending on which deck is selected and if the track is playing or not.

The performance pads on the Prime 4 are fully backlit where the SC Live 4 are partially, but that’s a matter of preference. The newer Denon DJ players have these partially lit pads too so it is just newer styling.

There are a few more buttons for direct feature access on the Prime 4 and more backlit, more in line with a unit that is designed to be used in a darker environment and on the road. However both have all the important functionality like the loop dial to create an easy loop in one press, then adjust it by turning. Also full length pitch fader, vinyl mode, reverse, sync, key lock and search buttons.

As mentioned at the start, the obvious difference here is the SC Live 4 has a fixed 7 inch display where the Prime 4 has an adjustable 10” one. The both work the same way with multi touch gestures and on the SC Live 4 a small section at the bottom to show you which beat effects are selected.

Here’s where things are a little different. The SC Live 4 has a simplified mixer section with less detailed LED’s on each channel and difference in the effects. The Prime 4 has a seriously comprehensive and some would say overly complex effects section, with 2 fx banks each with multiple OLED displays to select the effect and control multiple parameters.

The SC Live 4 takes a more simplified approach with a single dial to select which effect to use, another to select which channel to apply it to and another two for parameter and amount with a simple, large illuminated button to switch them on or off. This type of layout is typical of what you’ll see in a club. 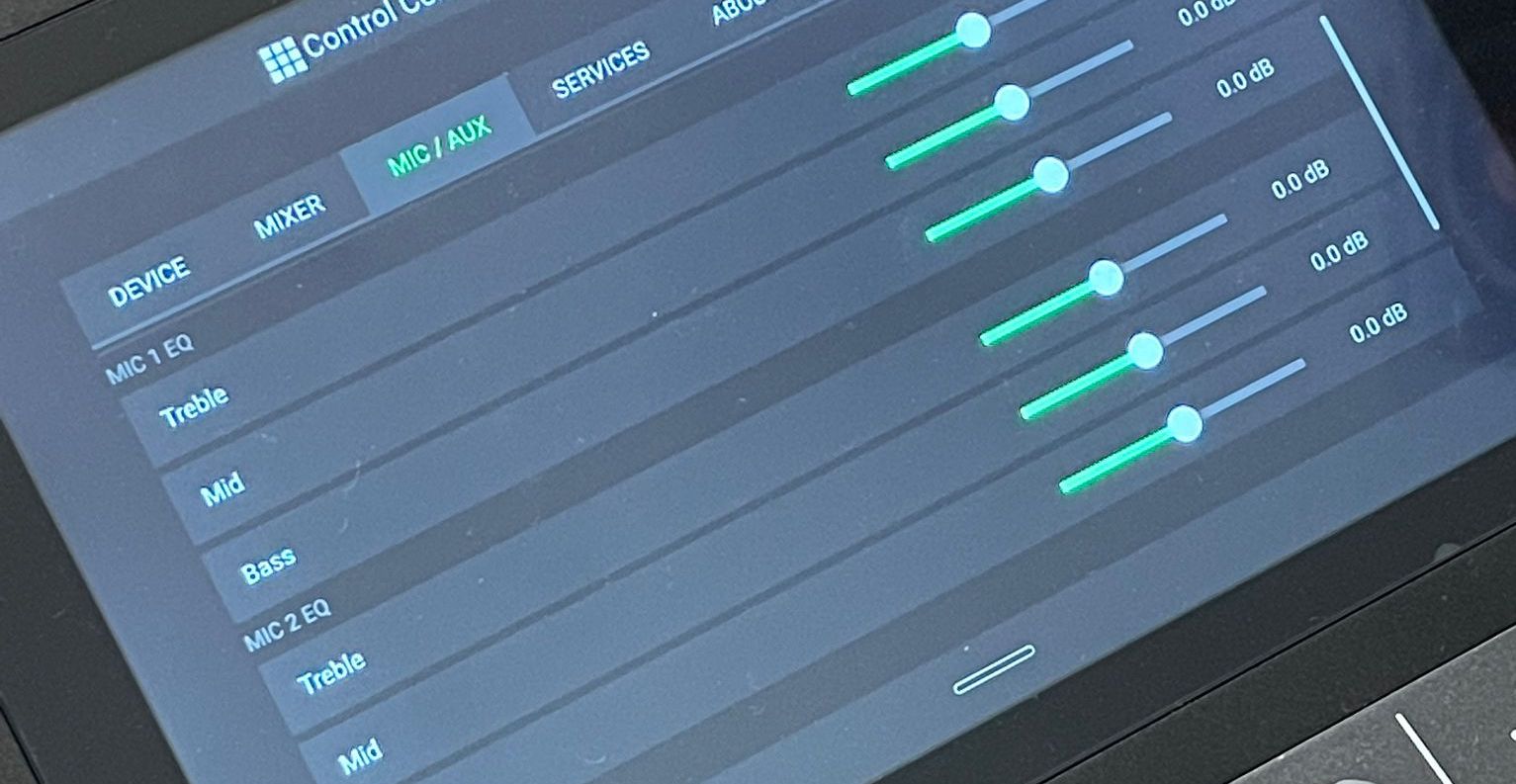 The next big difference is the mic section. Without question, the Prime 4 has a more elaborate mic section with 2 dedicated mic inputs with EQ and talkover. This makes it ideal for the “working” DJ doing more mobile work. The SC Live 4 has 2 mic inputs, with the first mic input having talkover but no EQ or dedicated reverb. The second mic input just has a level control, on / off switch and is switchable to an AUX input. Both mic channels on the SC Live 4 have 3 band EQ settings in the settings menu, not ideal for EQ’ing on the fly but better than nothing!

Again, another big difference here where the Prime 4 has external inputs for analogue sources like turntables or other media players. There is only a single AUX input on the SC Live 4 which doesn’t go through the mixer.

Other connections missing on the SC Live 4 compared to the Prime 4, there’s no internal bay for an SSD drive, only 2 USB ports in the rear (not the top) and no zone output. A minor difference is that the Prime 4 also has an ethernet socket which the SC Live 4 doesn’t. 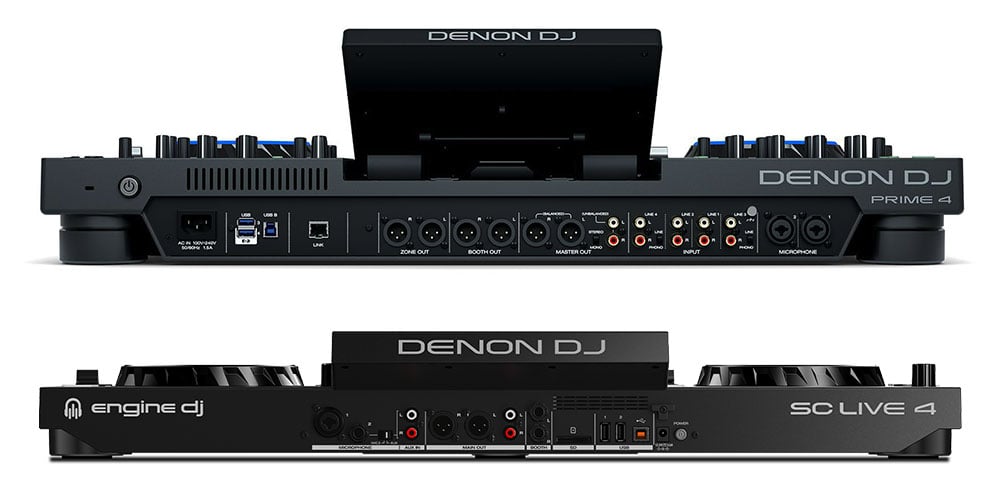 Also the Prime 4 has built in power supply requiring just an IEC cable straight in the back, the SC Live 4 uses an external PSU which some might argue is more hassle, however it makes it much lighter.

The Engine OS system allows connection to Tidal, Soundcloud Go, Beatport Link, Beatsource Link and Dropbox so you get all of these on both players. The SC Live 4 is the first to allow connection to Amazon Music Unlimited with over 100 million songs available for less than £10 a month.

From what we understand, it is unlikely the Prime 4 will have this same access to Amazon Music due to the service requiring a certain chipset.

Software compatibility is again the same on both, the SC Live 4 is hardware unlock for Serato DJ Pro and will work with Virtual DJ with a license. Just like the Prime 4.

Then there’s the speakers……

The first thing people say about built in speakers is “gimmick”, and that is understandable if you haven’t heard them. However, these are pretty decent and very functional. They are not as good as a pair of “proper” studio monitors that would set you back some £300 a pair. However, they will match a pair of £100-150 monitors and ideal for home use. If you want to switch them off, there’s a simple switch and the volume control will control the booth output.

The build quality is lighter on the SC Live 4, the Prime 4 has a more solid feel with metal chassis. The SC Live is still built well, just of lighter materials.

So, who’s it for? Which should you go for?

As stated at the beginning, there is no question the Prime 4 is aimed at the more Pro Mobile DJ - The better mic inputs, the extra inputs, zone output, built in drive bay are all important features.

Not all DJ's will want or need the additional features of the Prime 4 but will want to get in to the Engine OS EcoSystem at a lower price.

The SC Live 4 is perfect for those mixing at home, live-streaming and budding club DJ’s. It has all the essentials and is the cheapest 4 channel standalone player around.