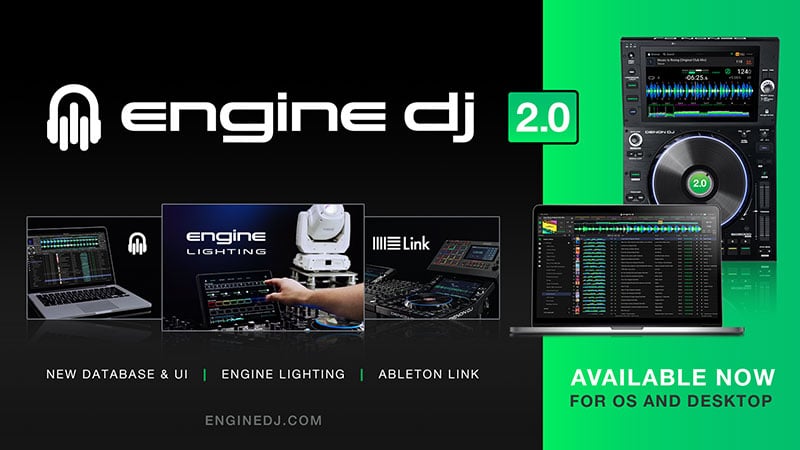 The new version of Engine Prime desktop and Engine OS have just been released and bring some major updates. Both have been re-written from the ground up adding much enhanced performance and some amazing new features.

Lighting control
The most exciting new feature with Engine OS 2.0 is the addition of Engine lighting by SoundSwitch. This gives you the ability to sync and control lighting with your Denon Prime unit.
Import lighting scripts from SoundSwitch to control your DMX lights to run perfectly in time to your tracks. For the home of live streaming setup, the new Engine OS 2.0 syncs over your local network to Philips Hue lighting and will run shows with no prior software programming or subscription required.

The Prime units have a whole section on the touchscreens to control lights by triggering presets and controlling certain elements. Immediately trigger popular actions such as setting all to white, blackout or strobe and manually override colours with 8 presets. There are two modes to chose from, basic and advance with the latter idea for the more experienced DMX users.

To maximise the use of these functions with DMX you will need to use SoundSwitch software on a computer to analyse your tracks and program in your lighting fixtures as well as the USB to DMX dongle connected to your Prime unit. SoundSwitch dongle is available for low, one-off fee including 3 months subscription to the software, after which a paid subscription is required.

Philips Hue control requires an existing Hue setup including a bridge and the Prime unit must be connected to the same network.

Ableton Link
If you know what this is, then it’s probably useful to you! Despite the name, Ableton link doesn’t require Ableton software or hardware to work. It is a protocol that is widely used with production hardware and software to synchronise devices and programs over a network.
For example, you could be using an Akai MPC workstation or Force and synchronise it to the track playing on your Prime unit.

New database structure and UI
The database has been rewritten to provide faster and more stable access as well as a smaller file size.
Engine OS 2.0 also has a new look user interface. There are now tabs in the preferences page to organise the many customisable settings in to groups.
This gives you access to select the new features or hide them if you don’t intend to use them.

Other great features include
Auto play a playlist and crossfade between songs (not auto mix mind you!).
Hear your microphone in your headphones
Clock! Really handy for checking things are running on schedule and also time-stamping play history.
Track list size can also be changed to a smaller text allowing more tracks to be visible on screen at once.
Demo tracks are now included to help anyone test the unit out or just to get mixing while you prepare your music.

The desktop preparation software has also had an overhaul.
The main thing here is the improved database structure offering super fast track analysis, faster browsing and enhanced stability.
Playlist and crates are now one. Lists are everything now, lists can now be nested - just like sub-crates, lists can contain tracks from multiple devices and can be reordered.

• Play History Upgrades – History lists from connected drives are now automatically added to the home collection and can be viewed from the new History tab without the drive connected. By default, History lists are named with the performance date but can be renamed as desired. History lists include the Start Time of when the track was played on an Engine OS device and can be easily imported as Playlists via right-click. In addition to Start Time, another new metadata option for Play Count has been added to the History lists to help users identify the most popular tracks from their Engine OS History lists.
• SoundSwitch Data Export – SoundSwitch users can now export their venue and light show data via the Sync Manager. Once the export option has been enabled, a SoundSwitch metadata column will be available in the library. Tracks with auto or customized light shows (scripts) will show a dot in this column.
• Apple M1 Compatibility – Engine DJ 2.0 is now compatible with Apple computer models with M1 processors.
• Third-party Library Upgrades – Third-party music Collections can now be imported in full via right-click on the respective Collection
list. Crate/Playlist play order, as well as Cue/Loop colour, are now retained on import.
• rekordbox Import Upgrades – Users now have an option to import either Memory Cues/Loops or Hot Cues/Loops when importing
rekordbox tracks into Engine DJ.
• Drag and Drop Folder Import – Dragging a file system folder with subfolders into Engine DJ now creates a new Playlist tree
mirroring the folder structure and contents.

All of these updates show Denon’s commitment to the Prime product range is constant and that makes these products a great investment.

See all of the available Engine OS controllers here.

Six Things You Can Do With Your Pioneer CDJ-3000