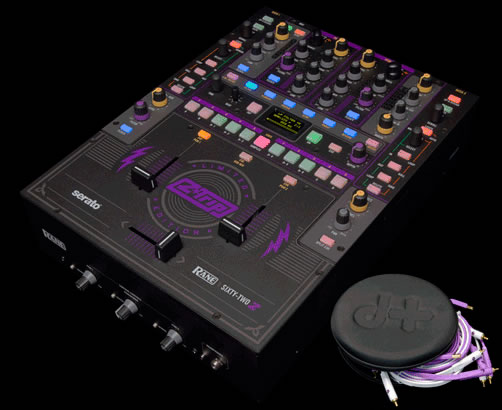 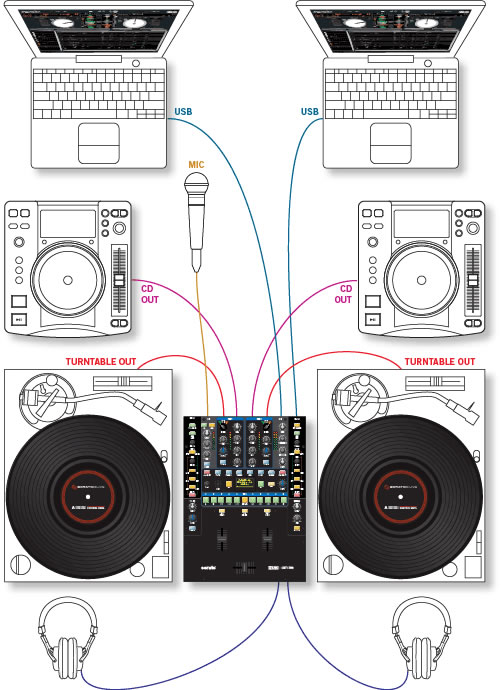 Z-Trip's Limited Edition Sixty-Two Z Mixer is functionally identical to Rane's Sixty-Two with added bonuses:
• Face plate design by Shepard Fairey.
• Purple and yellow accents.
• Includes custom purple cables.
Turntablism is alive and more creative than ever. Rane and Serato are proud to be supporting partners in that creativity with the introduction of the Rane Sixty-One and Sixty-Two Mixers for Serato Scratch Live. For more than a decade, artists have chosen innovative Rane instruments to advance their art and three generations of TTM series mixers have been the top pick for many of the world's best performers. These mixers more tightly integrate performers, music, software, and hardware. The artist adds the passion, imagination and skills.
The Sixty-Two is a plug-and-play package supporting two computers, two-deck digital vinyl simulation, SP-6 sample player, software and hardware effects and all the record and playback channels you need. Software controls for Library, Loops, Cues and SP-6 are laid out for fast and intuitive access. Choose the Sixty-Two and join a community of users dedicated to advancement of the art.
The Sixty-Two Mixer supports both analog and Digital Vinyl Simulation (DVS) playback. The mixer is bundled with Serato Scratch Live and includes a fully integrated MIDI controller for software controls.
A typical setup includes operation with two Scratch Live DVS channels, SP-6 sample player on an independent USB Aux playback channel and Software effects enabled on the USB digital insert in the FlexFx loop. This setup also allows recording PGM1 post-fader, PGM2 post-fader and the Main mix.
If you are looking for the same bullet-proof construction, pristine audio quality and integrated 20-channel sound card, but prefer to use your own MIDI controller with outboard software or hardware effects and a single computer, consider the Rane Sixty-One Mixer.
The Sixty-Two is available with all the same functions in two cosmetic versions:
• Standard Rane Sixty-Two Mixer with blue and gray accents.
• Z-Trip's Limited Edition Sixty-Two Z with purple and yellow accents. The face plate design is by Shepard Fairey, and includes custom purple cables.

Seen a video for Rane Sixty-Two Z-Trip 62? Send us the URL and published videos will receive loyalty points!

Do you own the Rane Sixty-Two Z-Trip 62? Why not write a review based on your experience with it.
Write a Review