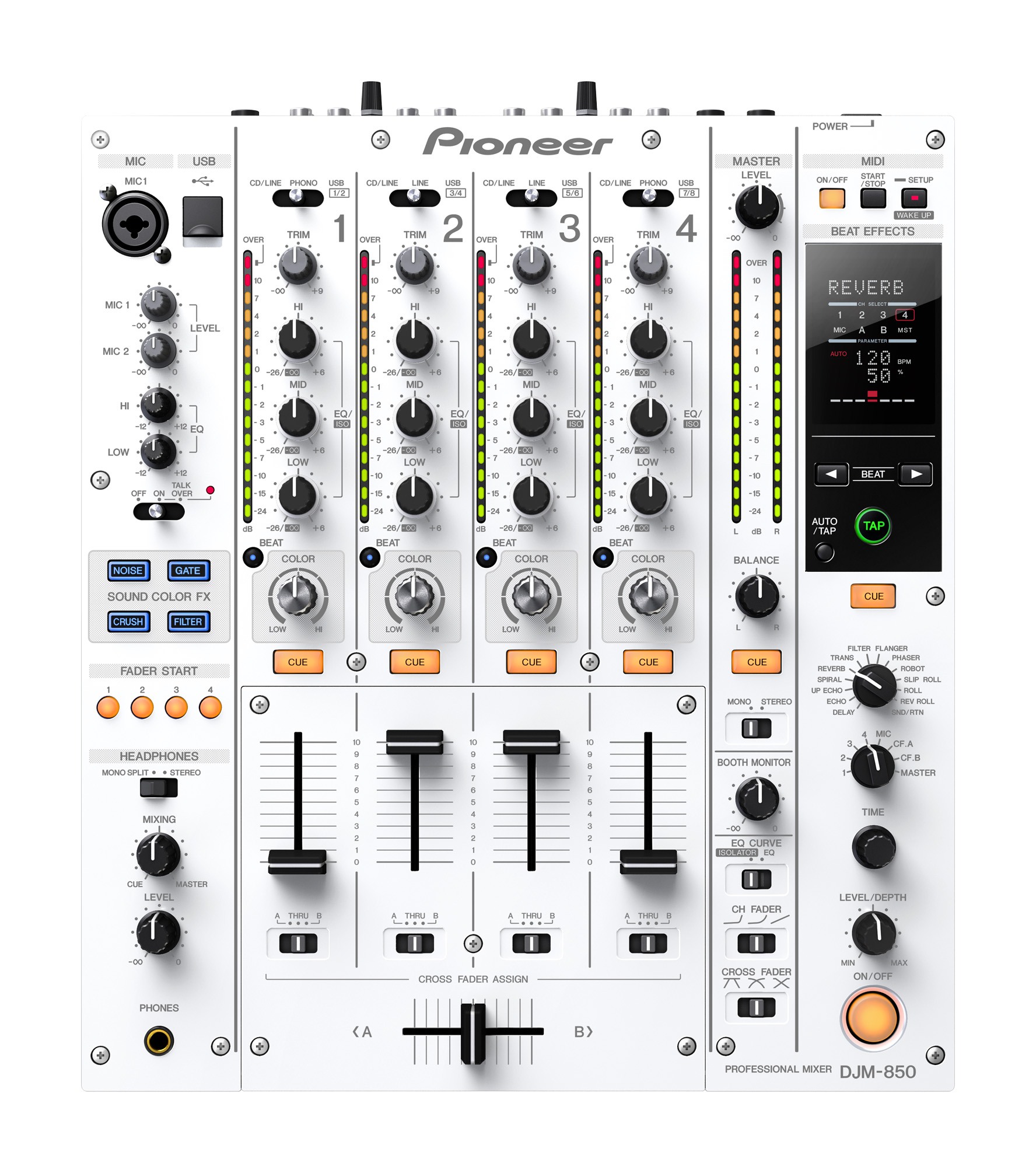 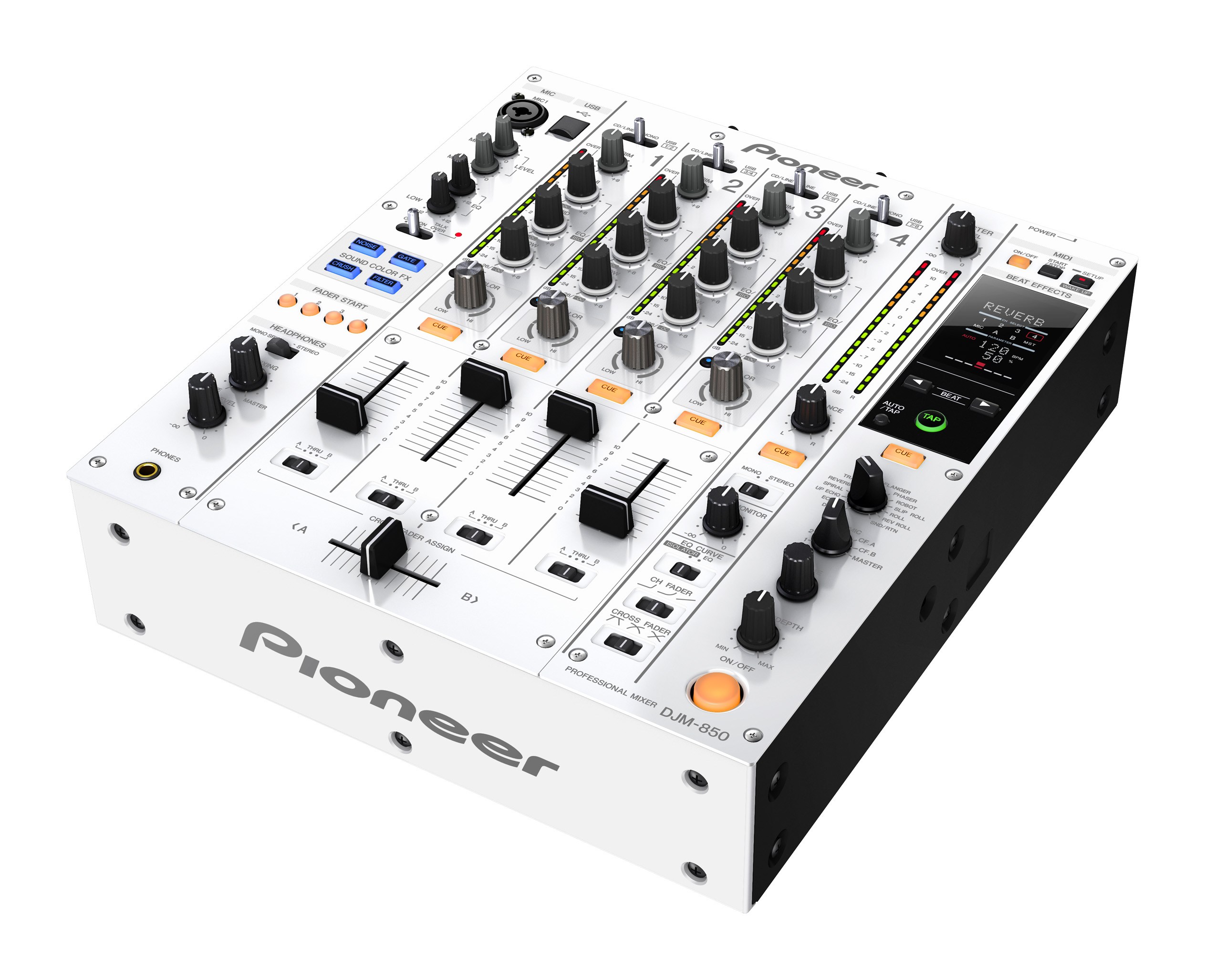 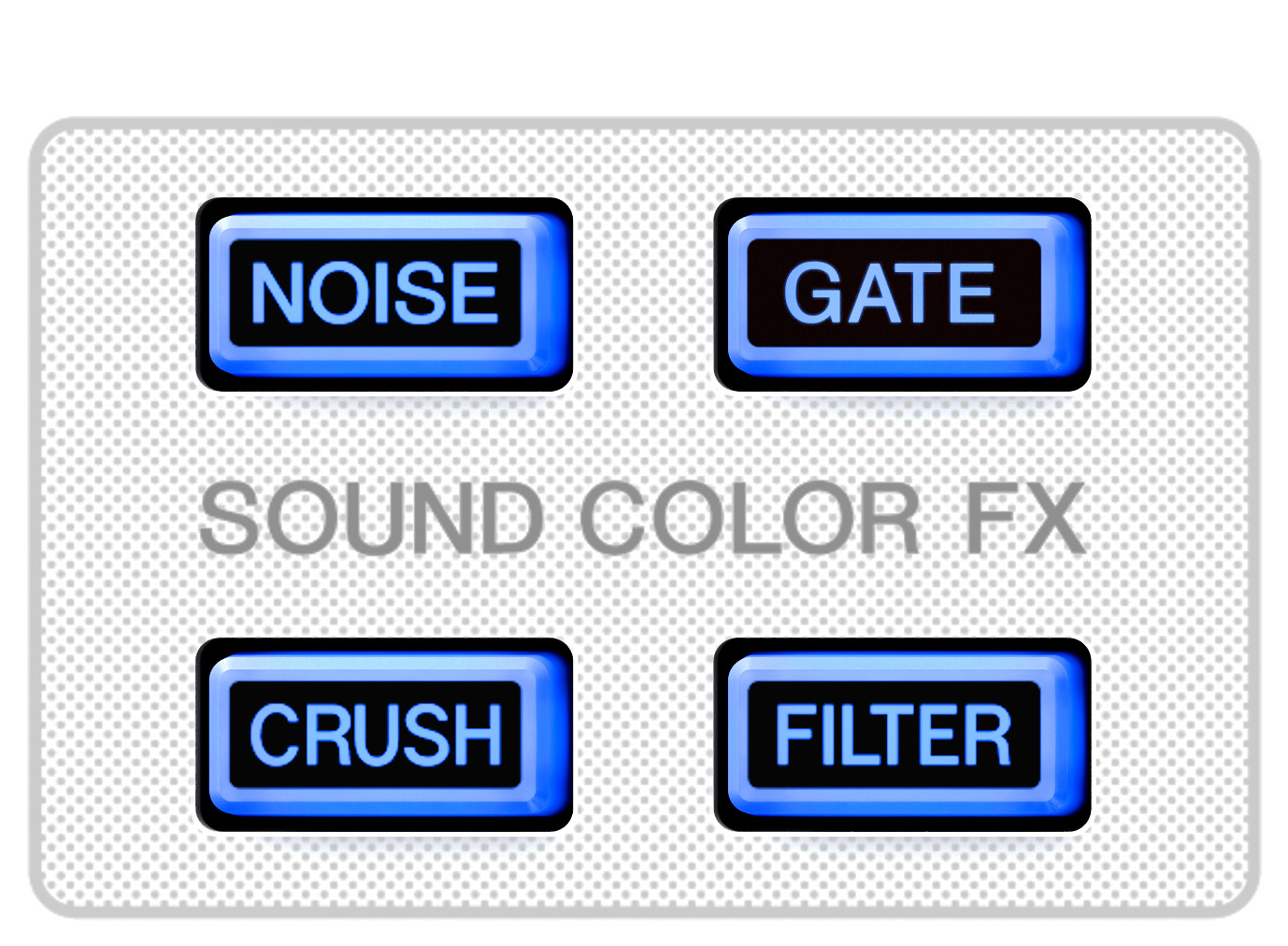 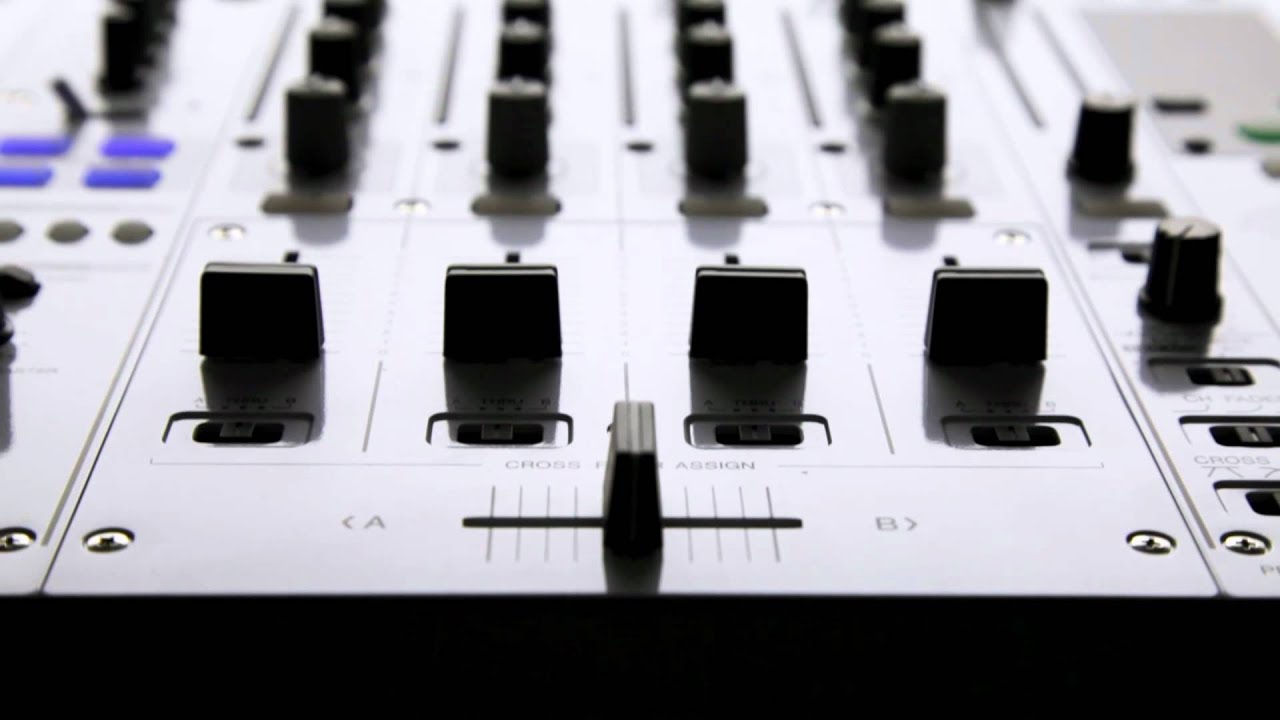 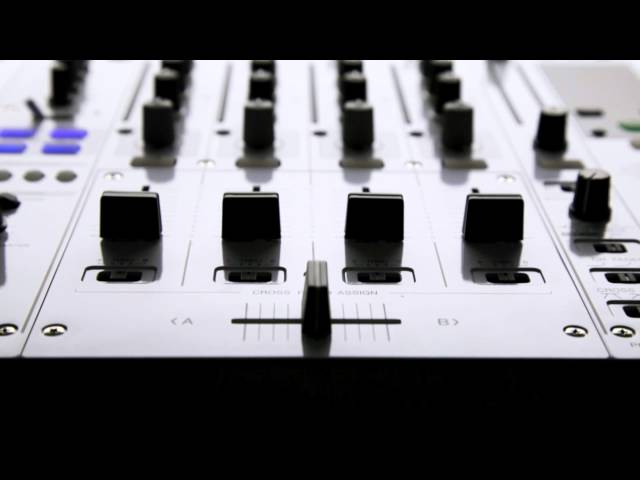 Pioneer DJM 850 White Special Offers When bought with this product

The Pioneer DJM-850-W White Pearl Limited Edition, continues to build on the foundations of the industry favourite range of DJ mixers and introduces new exciting features.
The DJM-850-W retains all that is good about the Pioneer series of mixers and continues to improve on its creative possibilities. A host of new FX options are available including the Beat Colour Effect, a unique side chaining process which is exclusive to the new DJM 850. Many new tempo synced effects have also been included which have the ability to control various parameters for exciting new rhythmical effects previously not possible with such intuitive control and ease of use. These new features really help to create fresh and exciting sets to work the dance floor time and time again. Control of your output is adjustable via its smooth faders, 3 band EQ and kill switches which have been borrowed from Pioneer’s flagship model.
Pioneer's DJM-850-W is built for both professional and home applications, high quality components allow for superb audio performance via its four stereo channels and two microphone inputs. An on-board 4 channel audio interface with configurable audio settings and routing allow you to connect directly to your host Mac or PC giving instant access to music libraries and software, meaning you can happily hook up your favourite DVS system for a natural and powerful set-up. Being able to recognise when a host is attached via USB allows for rapid integration when time is pressing and the extensive Midi capability on the DJM 850 further emphasises the complete nature of this mixer.
Pioneer’s reputation of high quality products continues with the DJM 850 W, solid and well thought out construction gives piece of mind when you need it most. Knowing that your equipment has been designed to be used in hot humid environments and to be transported from gig to gig means there are no catastrophes waiting to catch you out.

Variety of Effects The DJM-850 W follows Pioneer's traditional mixer layout, featuring a variety of advanced sound effects that provide DJs with virtually limitless possibilities when mixing their music. Pioneer includes a new BEAT COLOR FX function, which changes effects by linking the audio input from each channel.
Sound Color FX – The Sound Color FX offers four types of effects (Filter, Crush, Noise and Gate) that can be linked to the input sound of each channel. Beat Color FX – Users can quickly change between the new Beat Color FX and Sound Color FX to suit each tune for further remixing and sound capabilities. By activating the Beat Color FX, users are able to manipulate the Sound Color FX and Beat Effect simultaneously, resulting in more creative effects that complement the beat of the music.
Beat Effect – The Beat Effect function presents 13 different types of effects (Delay, Echo, Up Echo , Spiral, Reverb, Trans, Filter, Flanger, Phaser, Robot, Slip Roll, Roll, and Reverse Roll) that can be combined to produce up to 100 other original effects.
Sound Quality
The design of the DJM-850 White combines broad functionality and high quality components to achieve great sound quality:
24bit/96kHz Built-in USB Sound Card – An integrated high performance USB sound card enables up to four inputs/outputs2simultaneously with no deterioration in sound quality. The sound card supports three different sampling rates (96kHz/48kHz/44.1kHz) and the ASIO/Core Audio standards that can also be used for music recording and production.
The USB port on top of the mixer provides quick connections to use DJ software via laptop. The signal output path from the mixer can be easily modified using its setup utility tool3 via a computer. Sound Quality – The use of high quality components such as a 32-bit digital-to-analog output converter and a 32-bit digital signal processor, separate analog and digital circuitry, and extremely short audio transmission paths results in clear and powerful audio output.
TRAKTOR SCRATCH 2 Certified4
The DJM-850 offers compatibility to the Scratch Control (DVS)with Native Instrument's TRAKTOR SCRATCH PRO 2/DUO 2 software. Using the timecode disc bundled with the software and a PC, the DJM-850 is ready for scratch control (DVS) with a CDJ player or Vinyl turntable.
Additional Features
The DJM-850 is equipped with additional features that add to the versatility of the mixer:
MIDI Signal - Operation information of the mixer's knobs and buttons can be transmitted as a MIDI signal5 for a "Full Ensemble MIDI" function to control other connected devices. Switching 3-Band EQ/Isolator – Each channel of the mixer is equipped with a switchable 3-band EQ (+6dB to -26dB) and 3-band isolator (+6dB to -∞dB)
High Performance Channel Faders - The slide mechanism supports the fader knobs with two metal shafts for both durability and smooth operation. Furthermore, the new mechanism's design minimizes the negative effects of moisture and dust particles on the mixer's performance. P-LOCK Fader Cap - Keeps the fader channel and crossfader knobs (caps) locked, preventing them from physically slipping off during heavy use. Scratch Control - Scratch control6 is possible by using the time code disc7 bundled with DJ software supporting DVS (Digital Vinyl System)8 from CDJ players and vinyl turntables.
Auto Standby - Automatically senses active operation and the presence of input signals, switching to standby mode when inputs are not detected for a long period.

Seen a video for Pioneer DJM 850 White? Send us the URL and published videos will receive loyalty points!

Do you own the Pioneer DJM 850 White? Why not write a review based on your experience with it.
Write a Review