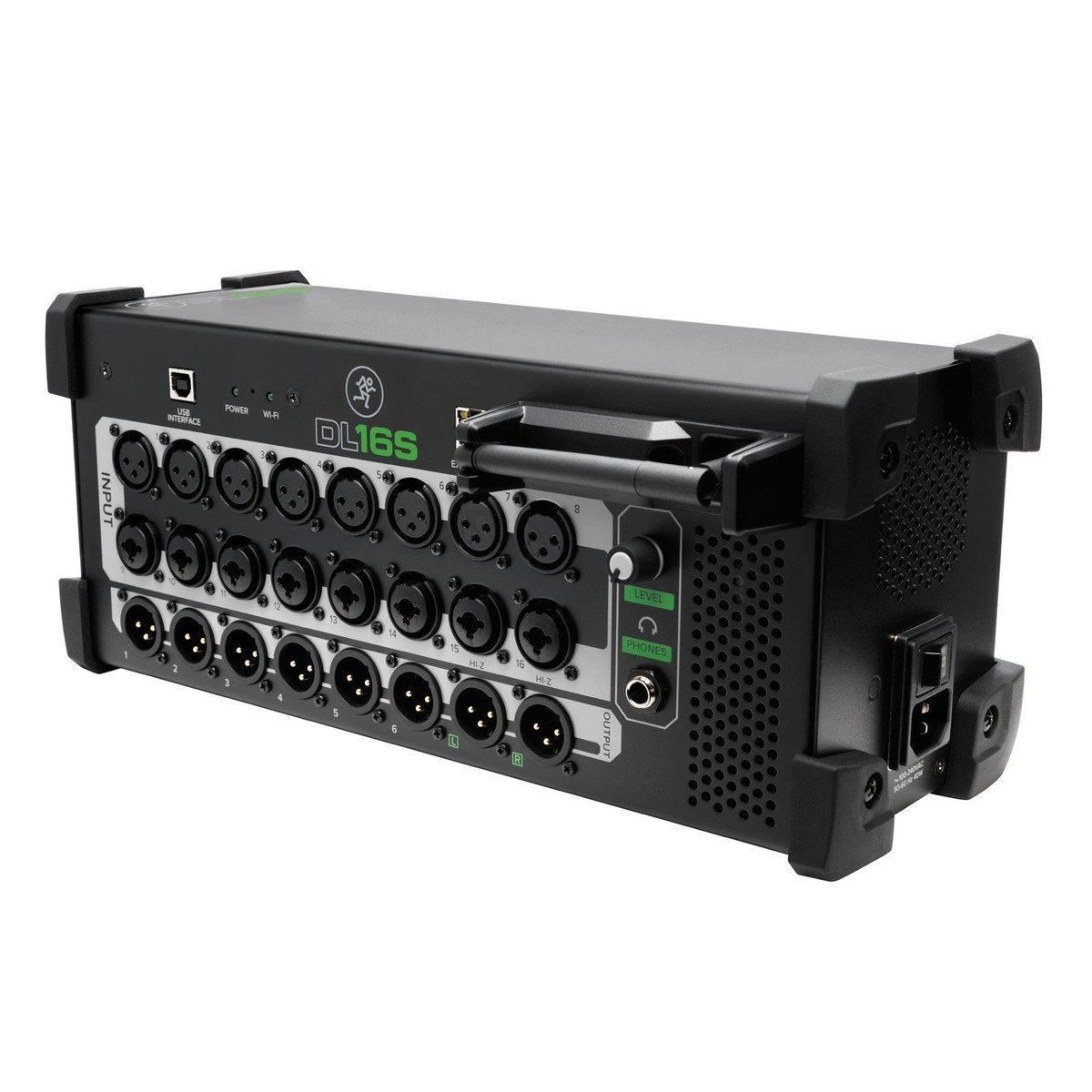 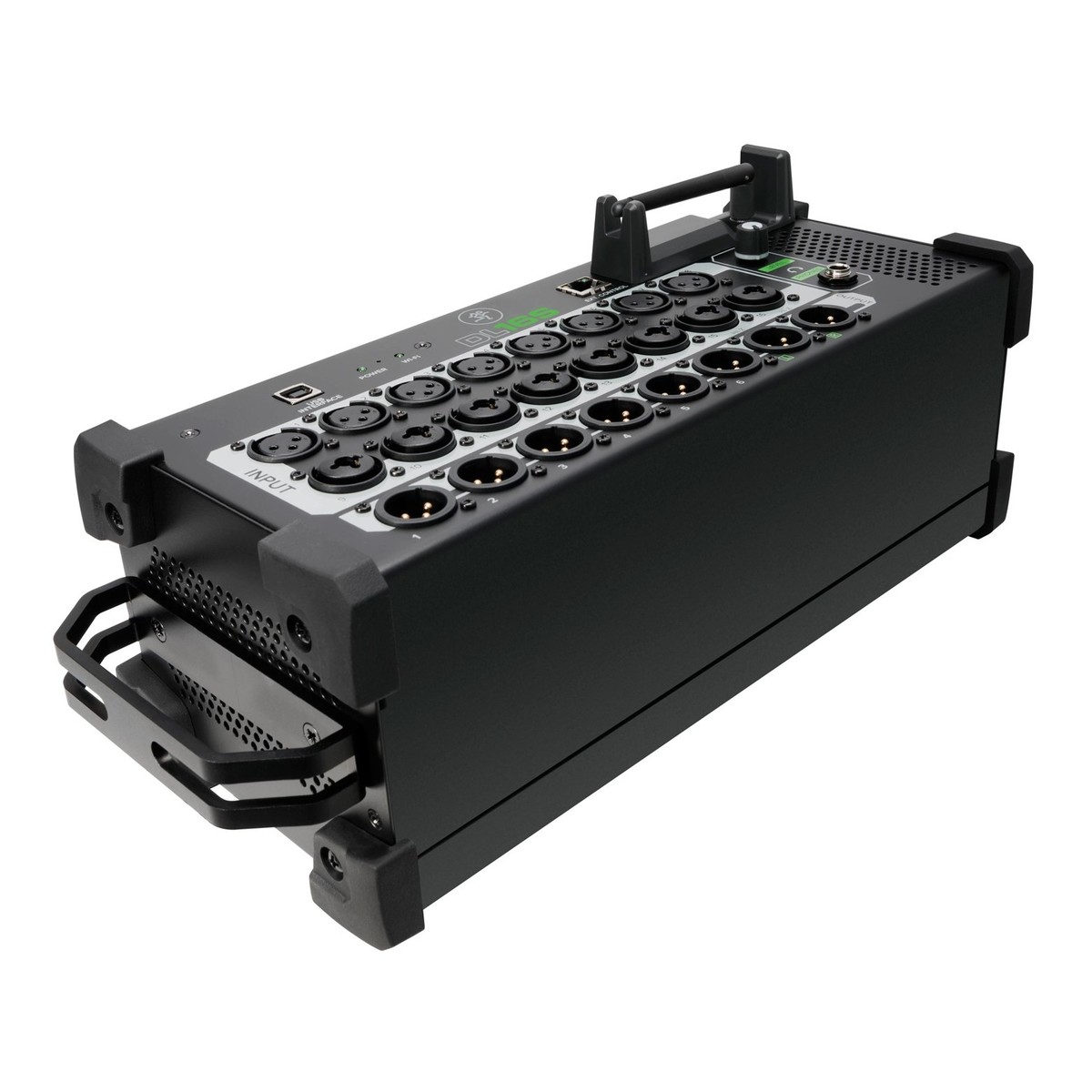 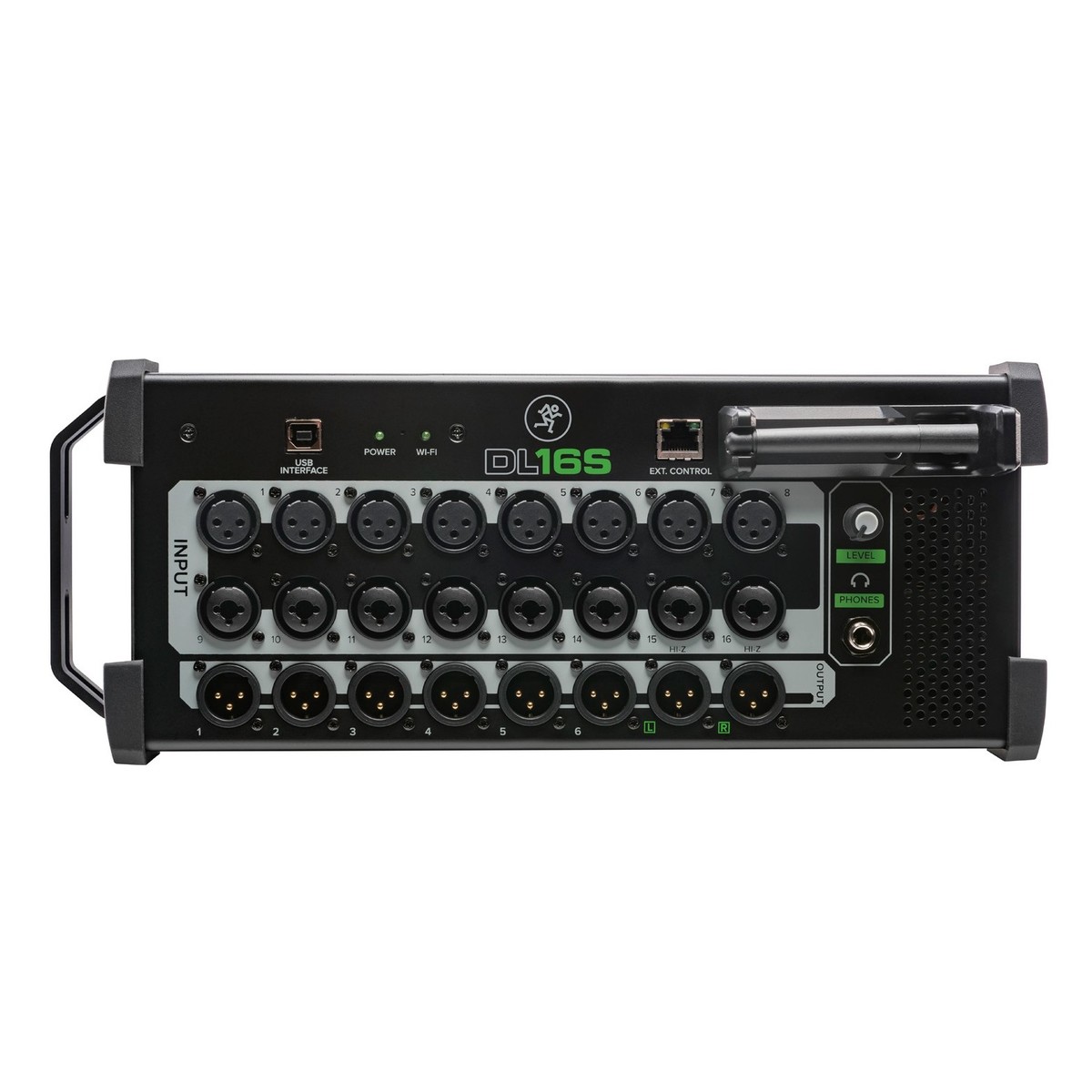 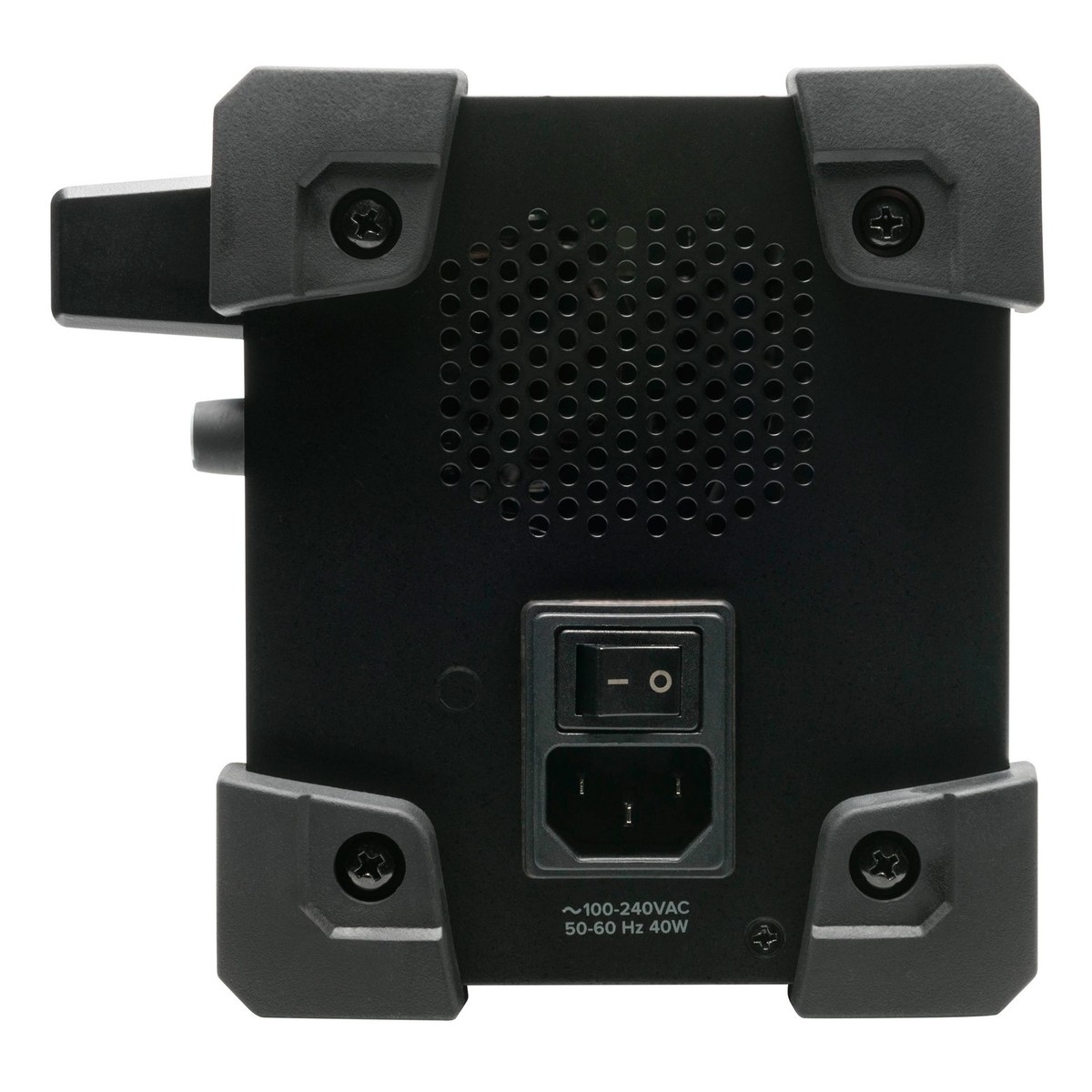 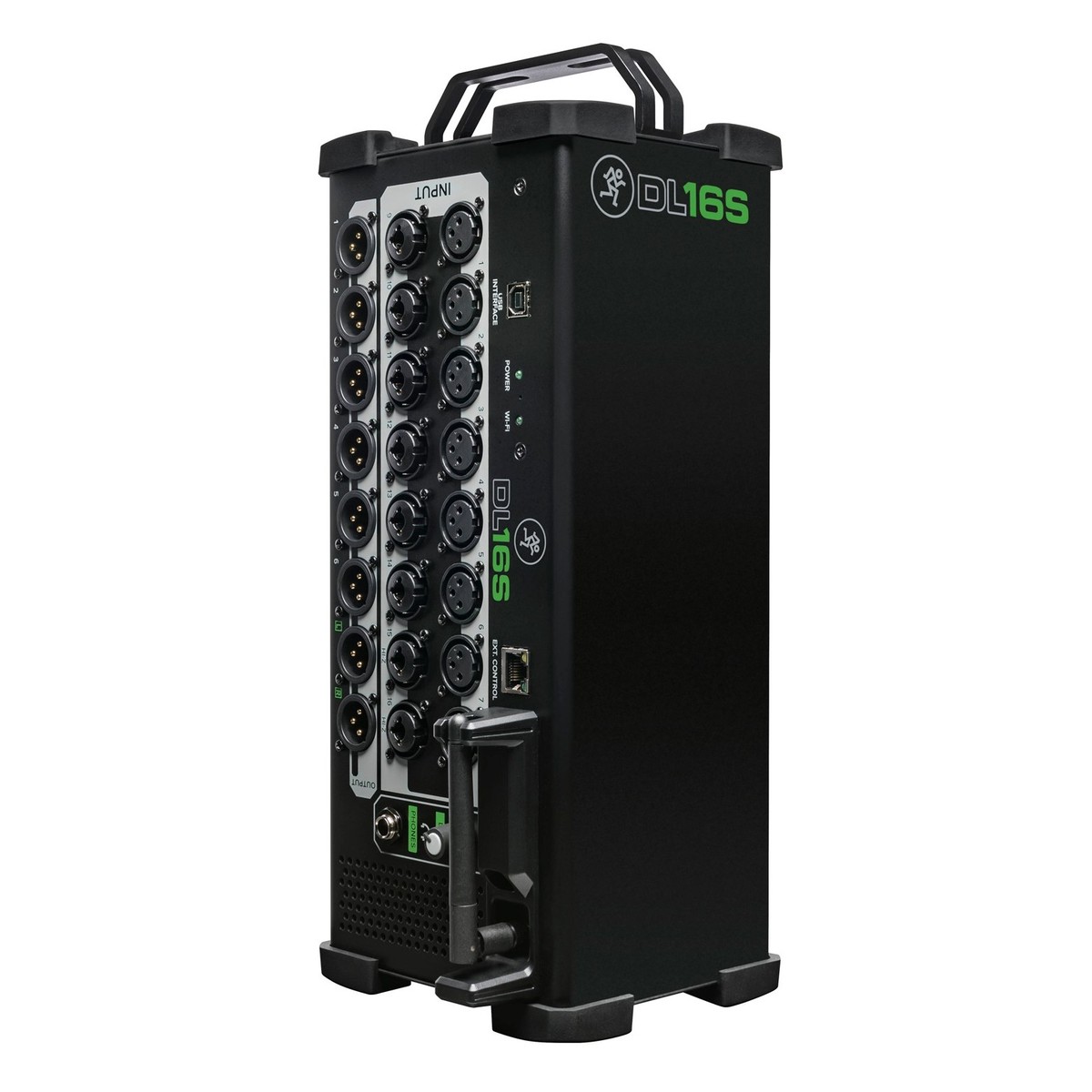 Mackie DL16S Special Offers When bought with this product

The Mackie DL16S 16-Channel Wireless Digital Mixer boasts extreme power and flexibility with a huge selection of unique professional features for both live and studio engineers. Building on the highly-regarded capabilities of Mackie's DL Series of digital mixing designs, the DL16S provides you with 16 Onyx+ mic preamps, each featuring an impressive fully-loaded range of DSP to achieve phenomenal sound with every single performance. Utilising an all-new Built-Like-A-Tank stage-friendly design, the DL16S can be placed anywhere on stage or in a rack and controlled remotely via the incredibly powerful industry-leading Master Fader control app. This versatile design enables multiple engineers to work from a single mixer from absolutely anywhere in the venue thanks to the built-in WiFi networking and multi-platform support. The DL16S also features a 16x16 USB 2.0 audio interface for use with MacOS and Windows PCs for exceptional-quality multitrack recording, virtual sound-checking and more. The Mackie DL16S is the perfect choice for a huge range of live and studio applications.

The Mackie DL16S is equipped with 16 stereo-linkable input channels, each featuring a 4-band parametric equaliser, high-pass filter, gate, compression, and RTA/Spectrograph. On top of these are 13 output busses consisting of 6 stereo-linkable aux sends, 6 stereo-linkable subgroups, and a main L/R bus. The DL16S's 4 stereo FX processors provide you with incredible built-in effects including reverbs, delays, choruses, flangers, and much more. The mixer allows you to take full advantage of its in-depth I/O routing with A/B sources for each channel, as well as assignable oscillators including pink/white noise and sine waves. The DL16S's comp/gate and EQs feature both Modern and Vintage options, enabling you to achieve the sound you desire. On top of all of this, the Mackie DL16S also features 6 VCAs, and 6 mute groups.

Equipped with 16 high-quality Onyx+™ re-callable mic preamps, the DL16S allows you to capture exceptional-quality audio in an enormous variety of applications and environments. Thanks to its built-in Wi-Fi networking and Master Fader™ multi-platform support, the DL16S does away with having a set FOH position - you can mix from absolutely anywhere. Place the mixer anywhere on stage or in a rack, and take advantage of Mackie's industry-leading Master Fader™ control app to digitally recall each and every one of your settings, utilise the fully-loaded DSP on each of the Onyx+™ mic preamps, and intuitively control every aspect of up to 20 connected devices simultaneously. With this powerful hardware and software combination, multiple engineers can work from a single mixer to achieve truly astounding results.

The industry-leading Master Fader™ control application offers complete in-depth control over any DL series setup. Boasting rapid navigation with view groups and overview, as well as quick setup options with a plethora of factory and user-definable presets, the Master Fader™ app allows you to access channel processing, signal routing, and a huge range of incredible effects on the fly. Master Fader; allows you to export presets, shows, and even complete system backups via a selection of platforms, as well as offering complete offline operation. The Master Fader™ application is available on iOS, Android, MacOS, and Windows, and receives easy and frequent updates to ensure the best possible user-experience.

The DL16S is equipped with a powerful 16x16 USB 2.0 audio interface for use with MacOS and Windows PCs. This versatile addition allows you to easily record a show to mix-down later, as well as play-back intermission music, backing tracks, and plenty more straight into a dedicated stereo return channel. Another unique benefit of the 16x16 interface is the ability to perform a virtual sound check with ease. This high-channel count recording solution is perfect for both live and studio applications, allowing you to utilize Mac or PC audio plug-ins no matter what situation you may be working with.

Seen a video for Mackie DL16S? Send us the URL and published videos will receive loyalty points!

Do you own the Mackie DL16S? Why not write a review based on your experience with it.
Write a Review