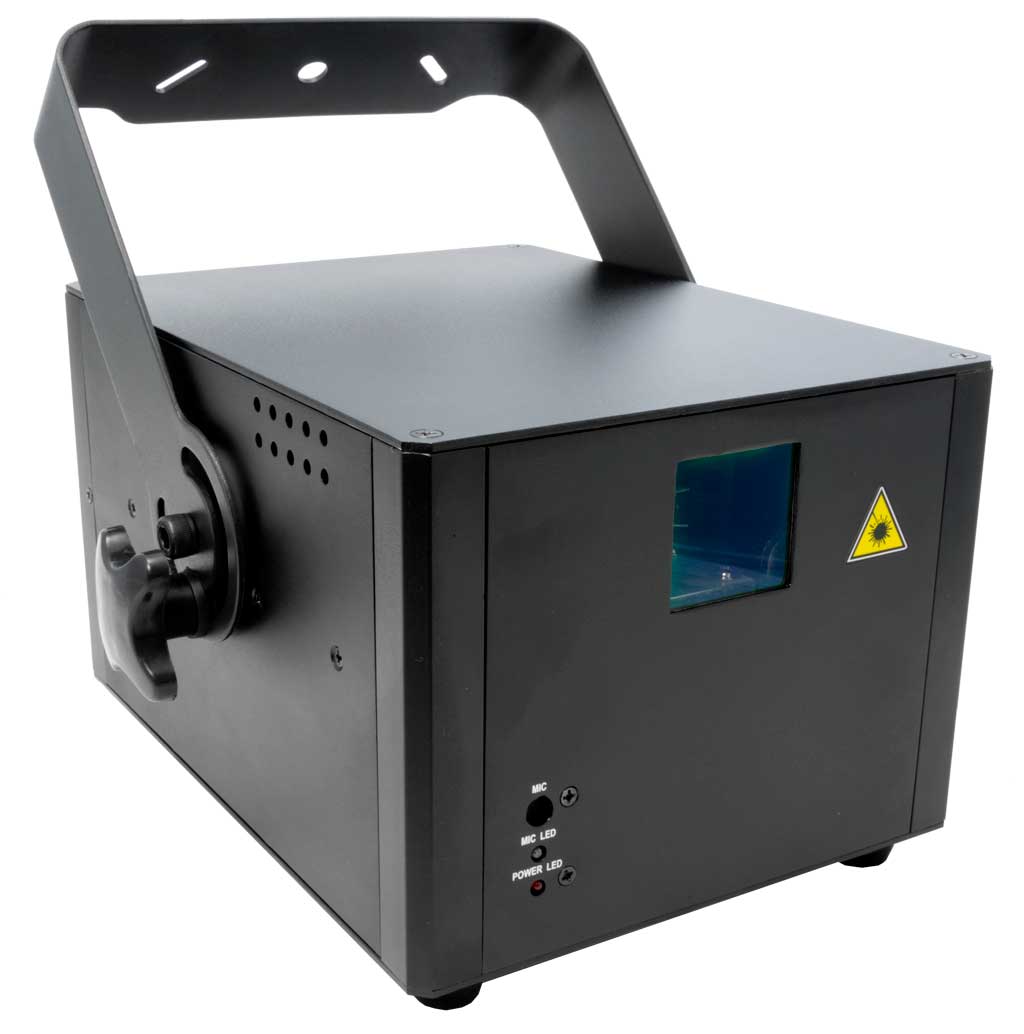 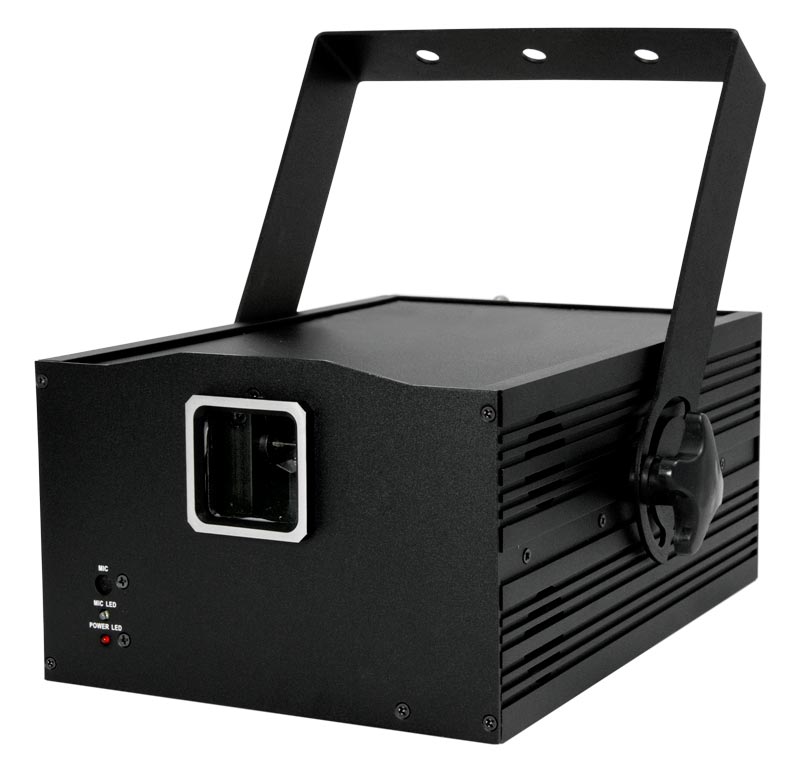 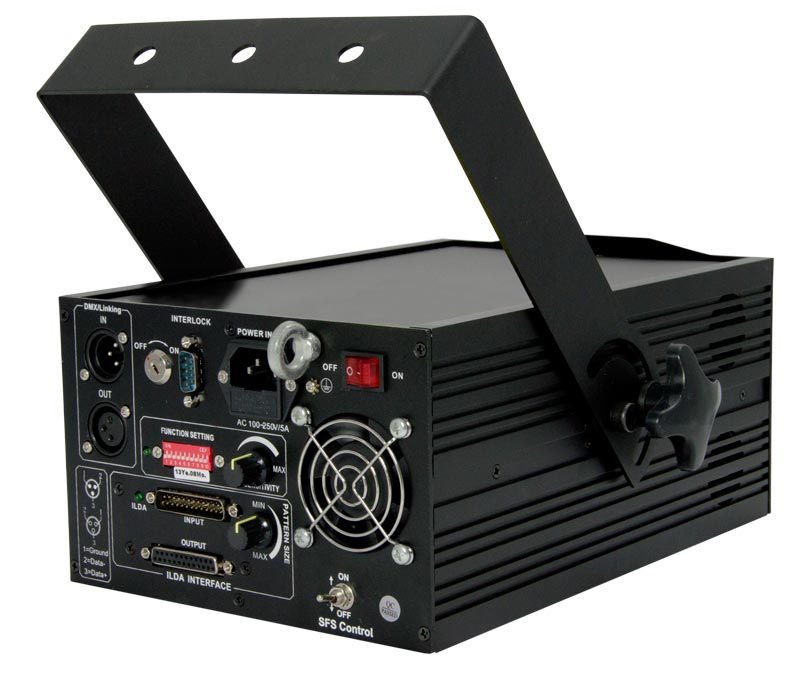 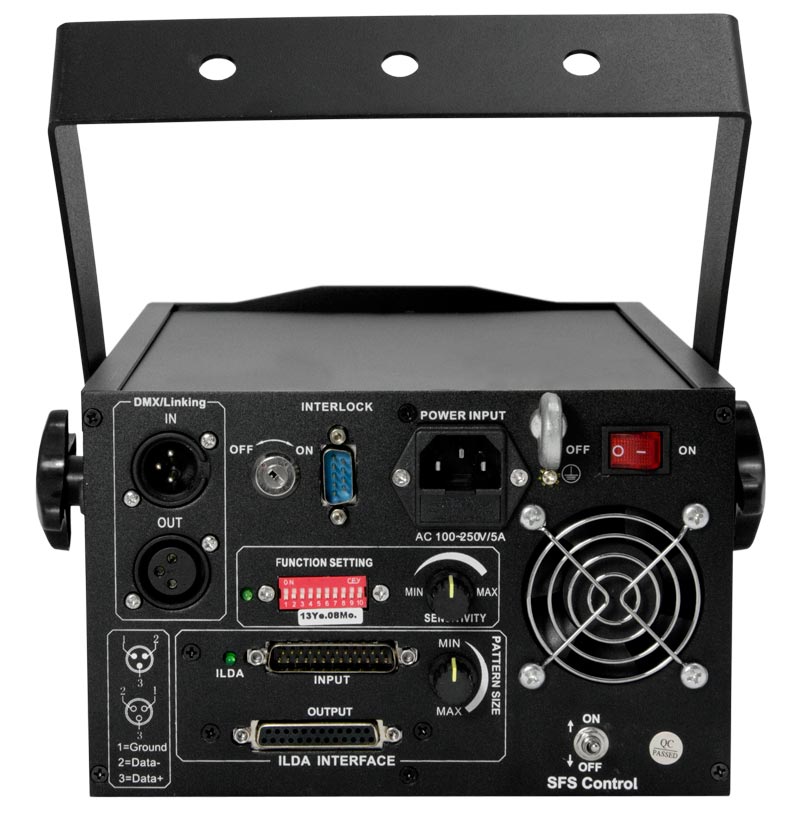 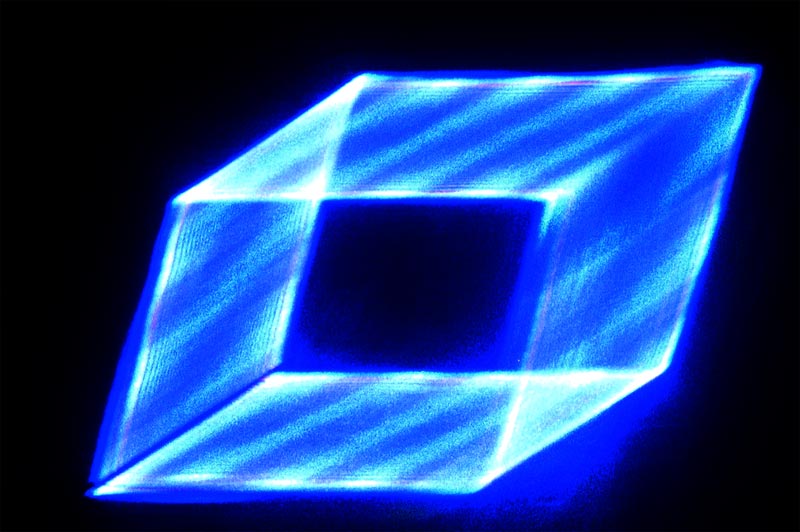 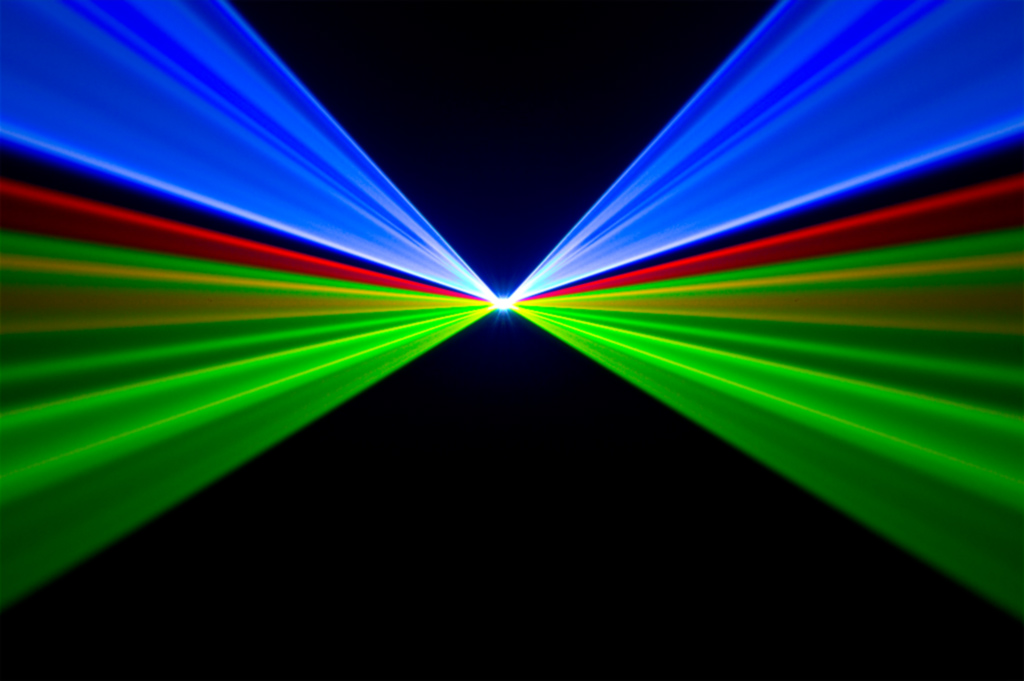 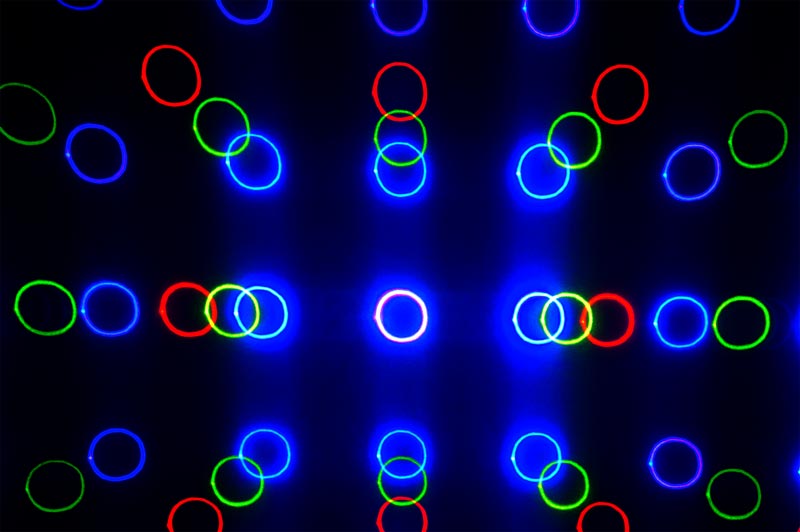 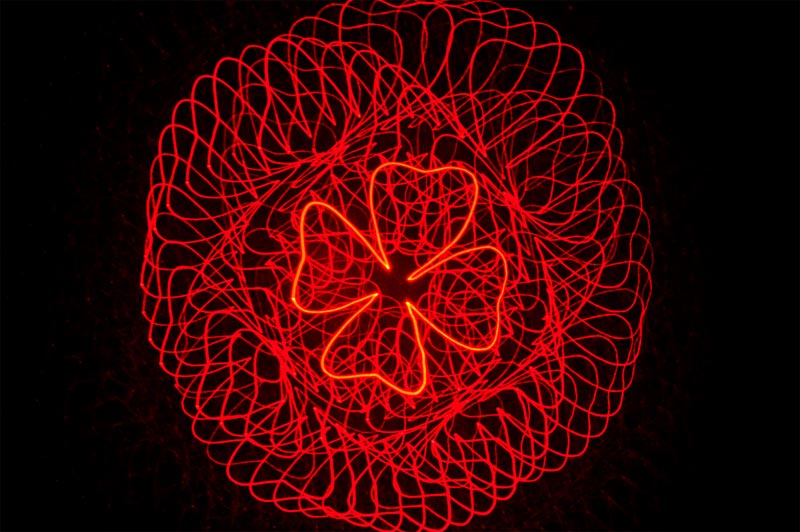 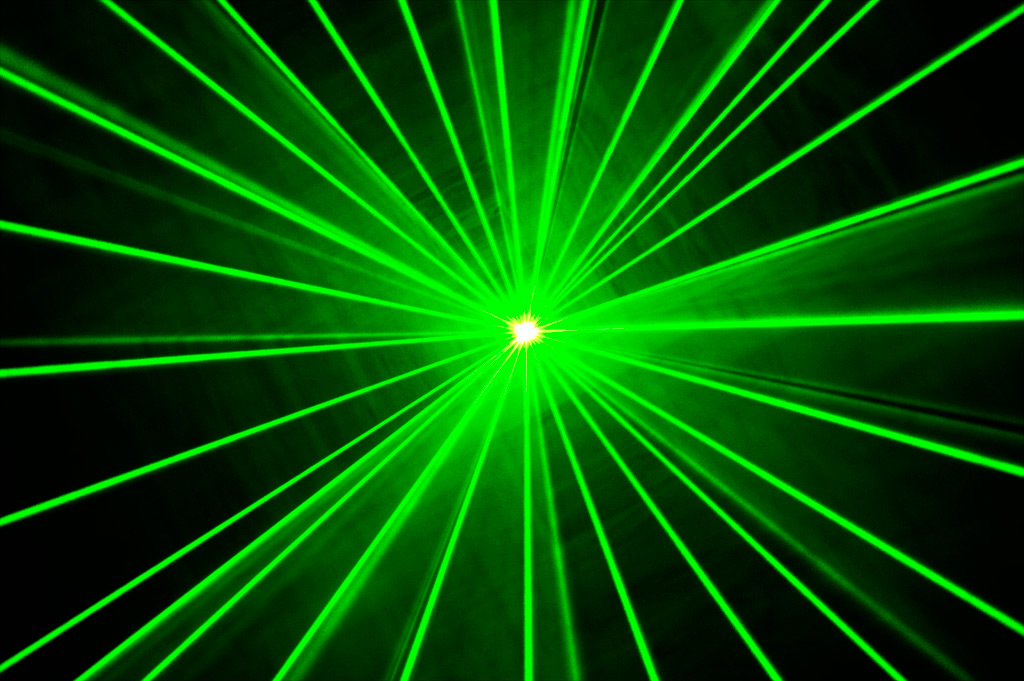 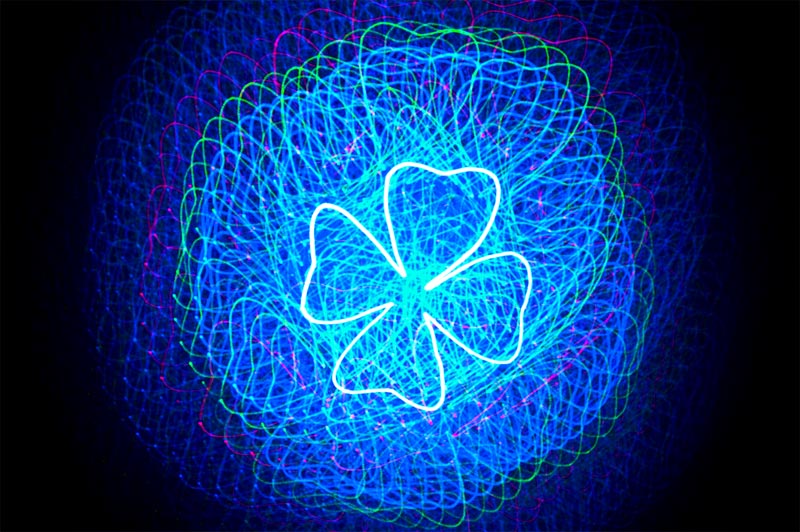 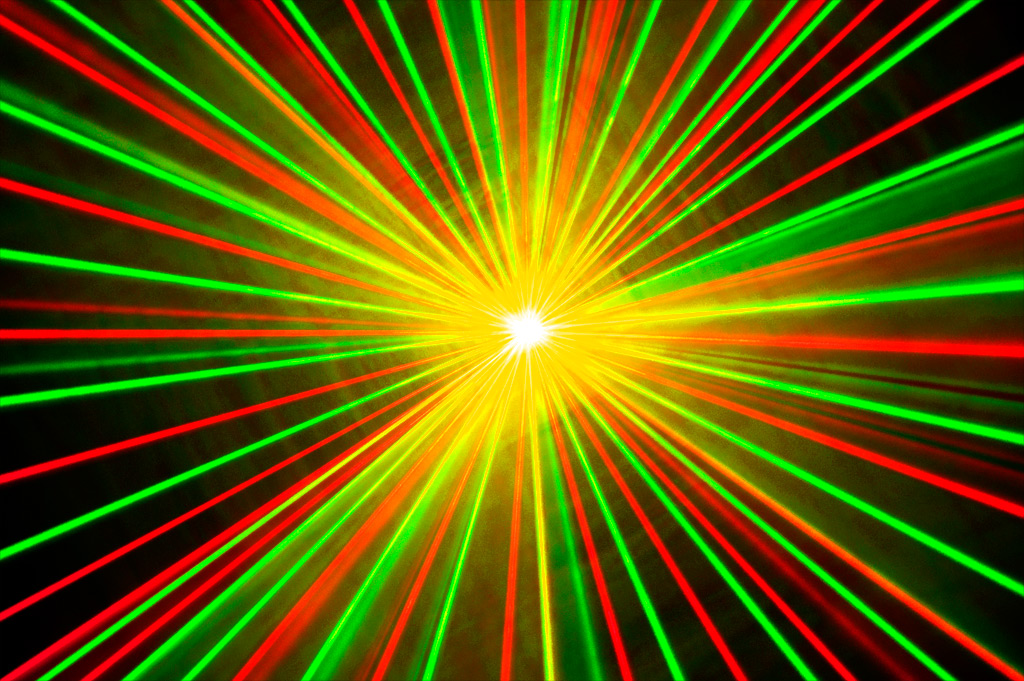 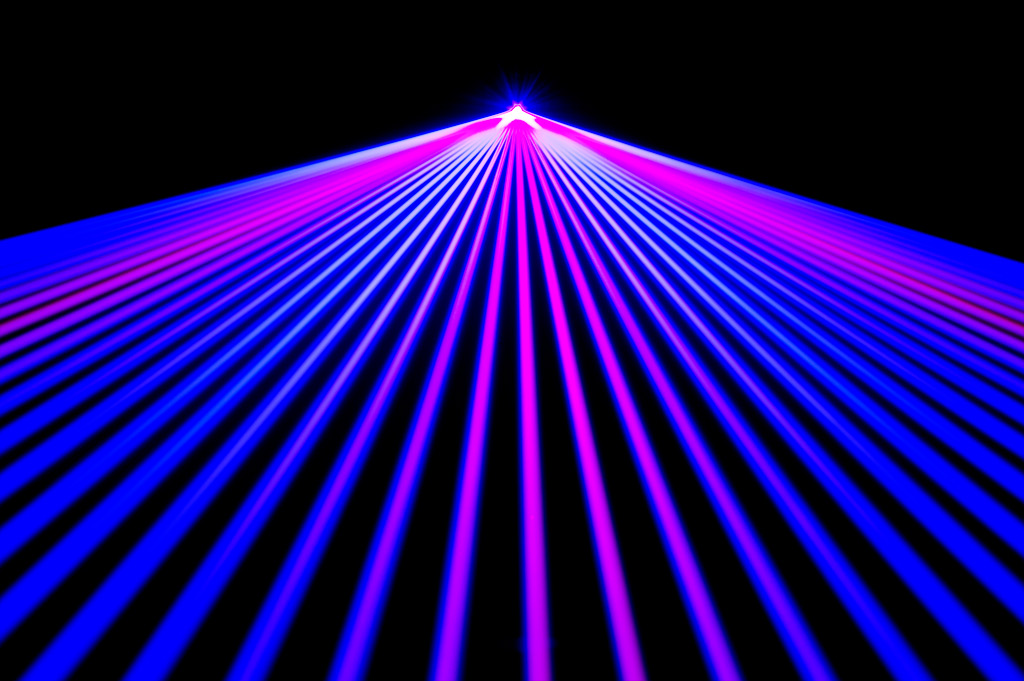 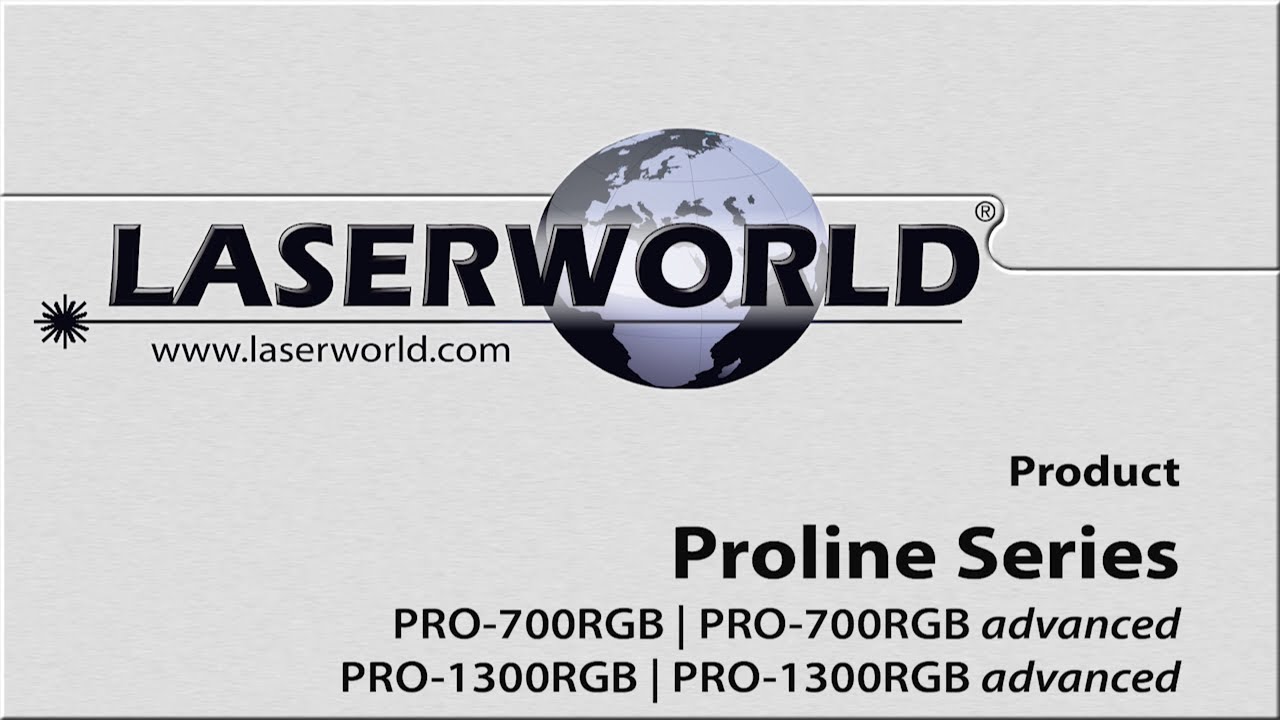 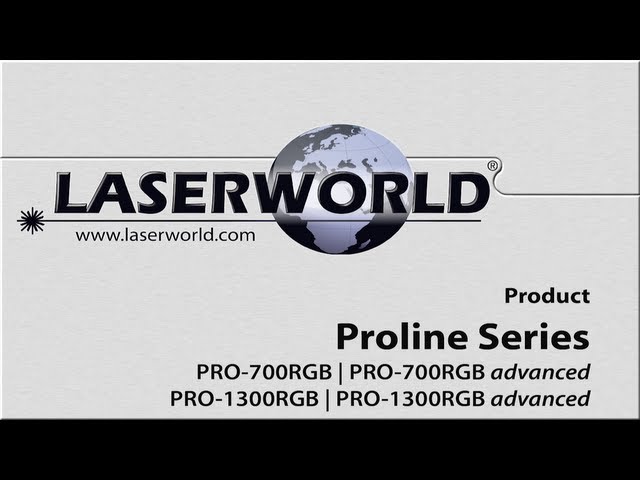 The Laserworld PRO-1300RGB is a white light RGB laser light system with a total output power of up to 1300mW. It not only is equipped with fast scanners for great projections, it also comes with the super bright 637nm red, that is visible several times better than the 650nm plus has a thinner, more accurate beam profile. Therefore the PRO-1300RGB ensures great visibility and is suitable for beam as well as for graphics projections. The very advantage of the projectors of the Proline Series is the integrated Glass Effects Actuator: The systems not only run in normal scanner mode. Similar to an optical bench they are equipped with additional grating effects. Without the effects it is possible to show emotionalizing beam shows as well as graphis projections. Through DMX control three different grating effects can be chosen:

2. Burst Grating mode â the scanned pattern is multiplied many times and covers a wide range

4. Radial Pattern Effect mode â A pattern i
s displayed in the center, the effect shows a multitude of this projection in circles around the center projection

Computer control:
The Laserworld PRO-1300RGB has an ILDA interface for professional computer control. Thus own or pre-programmed lasershows can be displayed by use of a laser control software, e.g. of Phoenix or Pangolin.
DMX Mode:
Through DMX preset patterns, like waves, tunnels, circles etc. can be projected in different colors and at various speed.

Automatic Mode:
The laser system has an automatic mode, which runs the pre-programmed patterns automatically.

Music Mode:
If the music mode is active, the laser system projects according to the sound. The microphone sensitivity can easily be adjusted at the rear side of the projector.

The rugged housing of the PRO-1300RGB is very compact and has dimensions of only 29 x 20 x 13,5 cm (W/B/H). A special feature of the housing is the mounting bracket that allows to fasten the unit in about 360Â° turns around the mounting axis of the bracket. This feature makes a fixed installation very easy.
The microphone for the sound-to-light reception and the status LEDs are located at the front panel of the PRO-1300RGB, next to the laser aperture. In the sound-to-light mode the MIC LED on the front side is flashing when the microphone receives sound triggers. A second LED lights if the laser is in operation mode.

On the rear side of this laser device, a variety of features can be set and different interfaces can be used. In addition to the power connection socket and an on/off switch there are interfaces for DMX in and out, ILDA in and out and for Interlock connection. In case of an active ILDA connection a green LED lights next to the ILDA interface. An integrated key switch prevents the laser system against unauthorized use. The PRO-1300RGB is equipped with a beam block "Scan Fail Safety", that can be switched on/off on the back panel as well. In active state this prevents the laser from projecting single beams.

Two rotary buttons on the rear side of the device allow adjustement of the pattern size and the sensitivity of the microphone. Furthermore there are dip switches for setting the different operation modes and DMX address. Finally a special loop for a safety cord has been integrated.

The PRO-1300RGB is equipped with red and blue diode laser modules and a green DPSS laser module. The red diode has a wavelength of 637nm for very good visibility at great beam specifications. Togehter with the green DPSS laser module with a wavelength of 532nm and the royal-blue diode laser module with a wavelength of 445nm the laser sources create brilliant colors and form a powerful source for the PRO-1300RGB.
The projector has good beam specifications with a beam diameter of about 3mm and beam divergence of about 1.3mrad. At the same time it offers a galvo system with up to 40kpps with a max. scan angle of 40Â° and a deflection angle for the grating effects of up to 80Â°.
The Laserworld PRO-1300RGB is a powerful whitelight laser system. This device is well suited for private use and professional applications and it is ideal for use in medium to larger sized clubs, discos and nightclubs or in other party locations. It is also a great solution for mobile DJs and rental companies.

Seen a video for Laserworld PRO-1300 RGB? Send us the URL and published videos will receive loyalty points!

Do you own the Laserworld PRO-1300 RGB? Why not write a review based on your experience with it.
Write a Review