Posted by djkit – 2 months ago 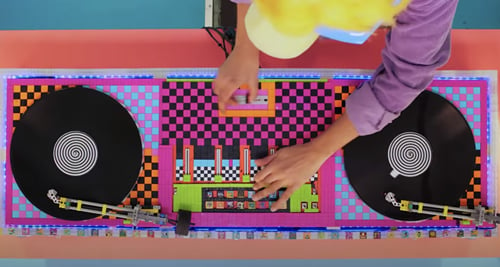 It is probably safe to say a fair few people (adults included) took the time to get reacquainted with their old LEGO sets during lockdown. A popular and surprisingly beneficial creative outlet, LEGO is a pastime that transcends pretty much all age barriers.

But there is one creative type who goes by the name of ‘Look Mum No Computer’ who took things further than most of us ever could. Sam Battle – who goes by the LMNC alias – managed to build a full rig of working DJ decks using almost nothing but LEGO.

The innovative artist from Kent didn’t say exactly how long it took to complete the project, which was officially commissioned by the Danish LEGO company itself. Not that it matters, as the final result was and is no less than outstanding – check it out for yourself in the link below.

A Work of LEGO Art

The attention to detail Look Mum No Computer has put into the final product is simply mind-blowing. There are decorative LEDs, there is a built in full mixer and he has even created his own custom LEGO slipmats.

Most importantly, it actually works! There are four motors embedded into the build, more than 4,000 LEGO bricks in the main casing and all manner of savvy electrical and audio hookup points to power this awe-inspiring deck.

As for what it is that makes this guy tick, here is a brief extract from his official bio:

“LMNC started back in April 2016, initially as a name for a ZINE, about my unavoidable dodgy creative side, but quite quickly became something completely different, When I decided to get the video camera out.”

“I’ve been a musician all my life, in various bands, ZIBRA, being the most recent one.”

“Now I mainly build musical machines and make music with them! I tour quite a lot, check my homepage for tour dates, I take my synths along for the ride.”

“I have no training in electronics, and about a year and a half of music at uni, so I wouldn’t trust anything I say because I don’t really know anything in an academic sort of sense, think of me more as a backyard engineer.”

LMNC even showcases what his LEGO decks are capable of with a brief set – complete with klaxon sound effects and scratching.

The project was commissioned by LEGO as part of the launch festivities for the new LEGO VIDIYO app, which uses state-of-the-art augmented reality to allow users to create incredible music videos where LEGO figures are brought to life in glorious 3D.

How to Protect Your DJ Gear from Harm

How To Get Festival DJ Gigs As a First-Timer