Denon Prime 2 or Pioneer XDJ-RX2? What are the differences

Posted by Eitan – 2 years ago 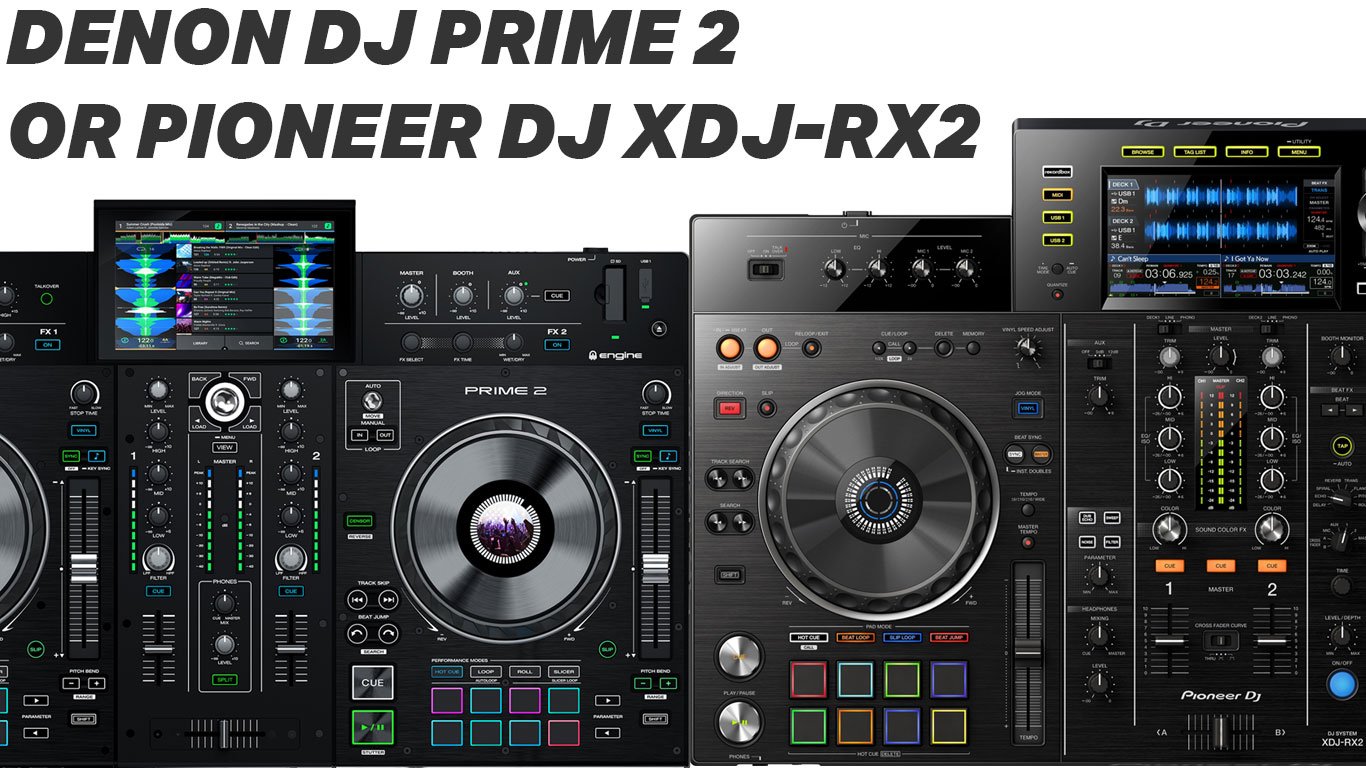 Denon Prime 2 or Pioneer XDJ-RX2?
The Pioneer XDJ-RX may not have been the first ‘all in one’ digital DJ console but it certainly set the bar for anything close to a pro setup and its’ ease of use.

Followed up with the XDJ-RX2 which added more performance pads, better screen and improved mixer. Again, this remained unchallenged until the Denon DJ Prime 4 came out.

However, comparing the two wasn’t exactly fair, but now Denon DJ have just released the Prime 2 which is much more similar so we’re going to run through them side by side.

The Prime 2 has a built-in 2 channel mixer, 7 inch touchscreen, USB and SD card inputs as well 8 performance pads, built in effects and even wifi.

We’re going to break the comparison down to 4 parts: 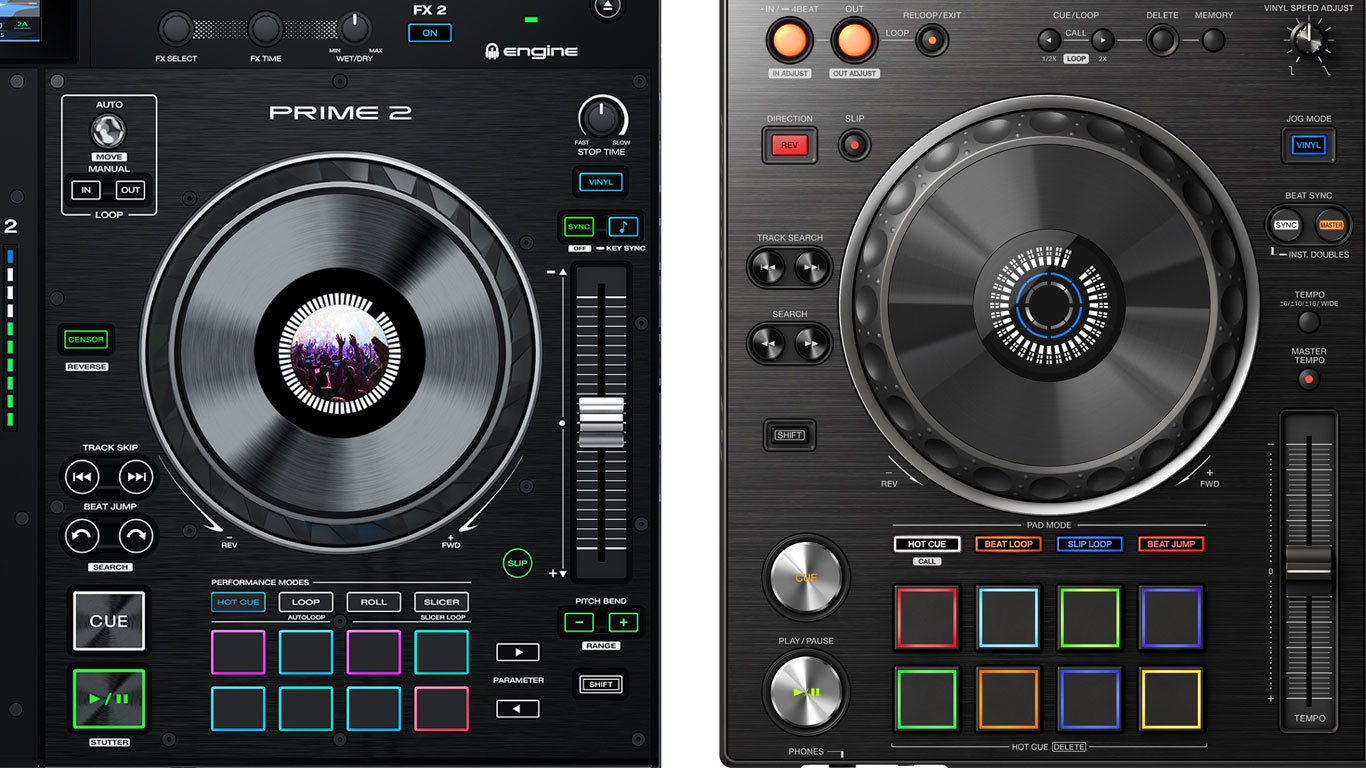 Both player controls look similar, both with reasonable size jog wheels, both being 6 inches in diameter. The Prime 2 jog wheels are capacitive which means the top just needs a touch to ‘stop’ the song where the RX2 uses pressure so relies on downward movement to do the same. Neither is technically better, both have their pros and cons, it’s really a matter of preference.

The Prime 2 jog wheel has a built in display which can show track or album artwork or even a custom logo, it will also show track movement with the segmented ring and loop information. The RX2 however only shows a segmented track display.

Both have the standard cue, play and track select buttons as well as 100mm pitch faders.
The Pioneer DJ XDJ-RX2 has the same familiar loop in and out buttons found on all their units, where the Denon DJ Prime 2 has a push down rotary encoder which will set a loop automatically and can be adjusted by turning the knob left or right.

There is a brake / start up adjustment on both units as well a vinyl emulation switch which will turn on or off the top jog wheel plate to allow you to scratch or just pitch bend like on a turntable.

The only other difference here is the Prime 2 has a key match button along side the sync to give you a closer match with the song you’re mixing in.

In summary, both players are extremely similar here which is actually a huge plus as it means most DJ’s will be able to jump between the two units and be immediately familiar with either one.

The Prime 2 has two effects banks, one for each deck. On either side there are 3 simple dials and a button. The first dial lets you select the effect, with 14 to choose from, the second is the parameter control and third is the wet / dry level. Effects are activated by a simple on / off button. This allows the user to assign two different effects simultaneously on either deck.

The XDJ-RX2 effects section will be familiar to anyone who’s used a Pioneer mixer or controller. With their standard rotary control to assign the effects to either side of the crossfader, any individual input or the overall master output. Another dial selects one of the 8 effects, then you have the parameter and wet / dry controls with the big round blue button to activate the effect underneath.
To clarify, this allows you to only use 1 effect at a time but you can assign it to a variation of the inputs including the mic or the aux in, which is not an option on the Prime 2. 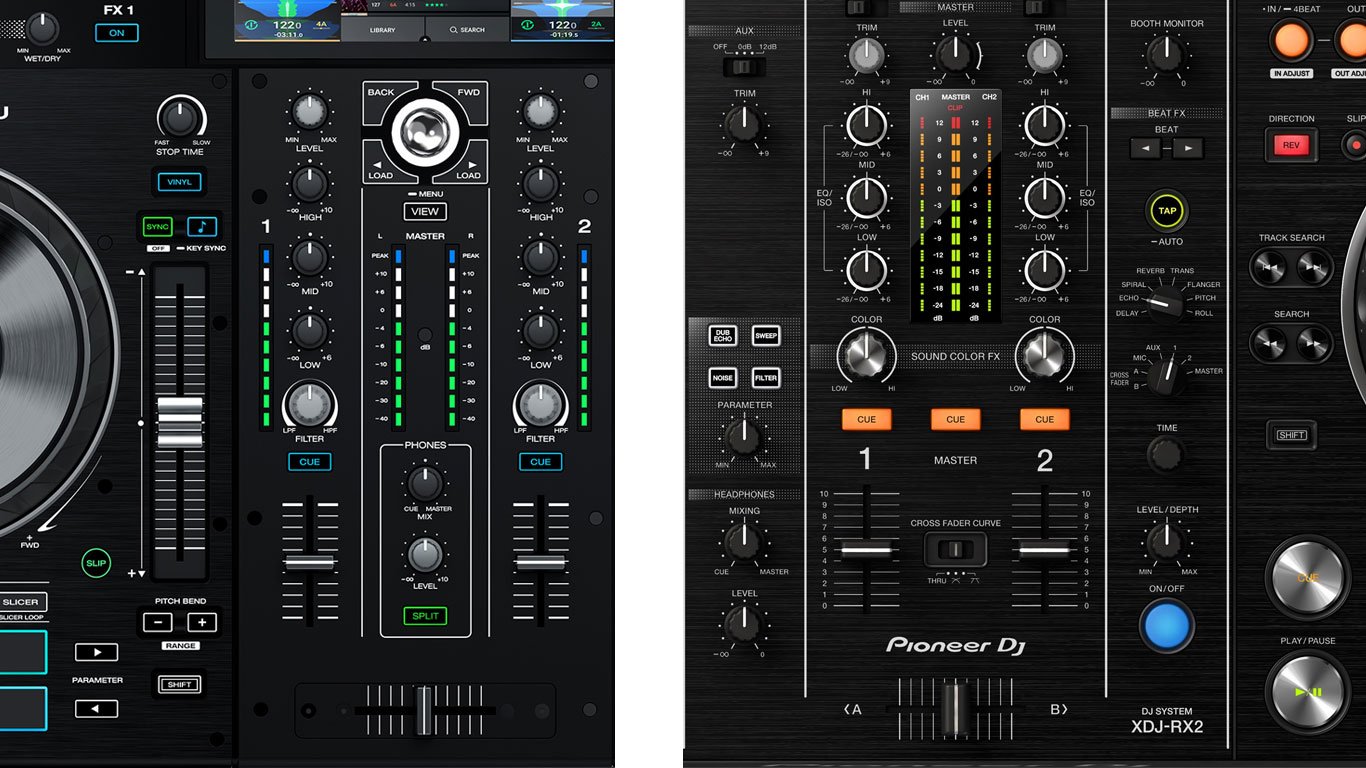 It’s a very familiar layout on both with the cross fader at the bottom of course and two channel faders. Above them  is a filter control on the Prime 2 and Color Fx on the RX2. Both topped with 3 band eq and trim controls.
The main channels on the RX2 can be switched between the internal players, phono and line.
So along with the aux input you can have a total of 5 external sources connected along side the internal usb player. Each of these can have effects assigned to them too.
With the Prime 2 there is only an aux input at line level.

Both have two microphone inputs which share EQ controls and talkover, the XDJ RX2 has two band EQ where the Prime 2 has a 3 band as well as individual on / off for each mic. 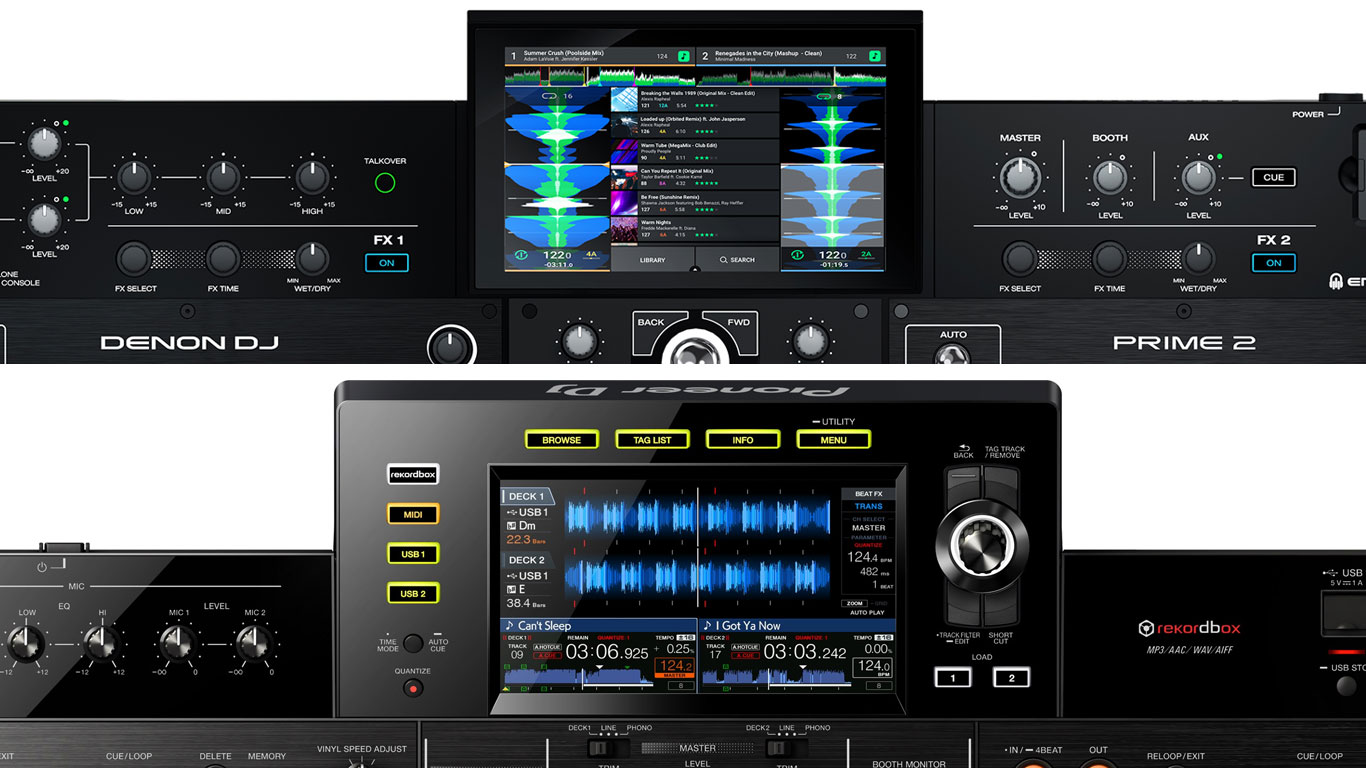 The most striking and arguably integral part of these two players.

Both screens are 7” across and touch screen, the Prime 2 uses multi-touch offering the same ergonomic user experience as a tablet or phone. Allowing you to pinch to zoom in on waveforms, scroll through playlist and swipe to load tracks.

With the Prime 2 accessing the menu, selecting sources and adjusting settings are all done through the touchscreen.

The XDJ-RX2 uses the surrounding buttons and navigation dial. The key advantage with this format is the familiarity with the CDJ range of  players so everything is in the same place as you’d expect.

The displays on both units are fixed at an angle and easy to read. The Prime 2 has a higher screen refresh rate for smoother graphics and movement. On the rear of the machines are the input and output ports, the Prime 2 only has an RCA AUX input at line level. The XDJ-RX2 has 2 phono, 2 line and an AUX input as well.
Both have XLR / TRS combi sockets for the microphone inputs.

For the outputs, they both feature master outputs on XLR and RCA, both have booth outputs with the Prime 2 using XLRs and the XDJ-RX2 using TRS.

Both players have USB connections to a computer for using them as midi controllers and have built in power supplies with IEC connectors.

The last thing to mention is that the Prime 2 has built in wifi allowing you to connect to Tidal streaming service. This is completely unique to the Denon DJ Prime range.

So we hope that helps you weigh up the pros and cons of these two amazing units, you can always give us a call if you have any questions about either of these.