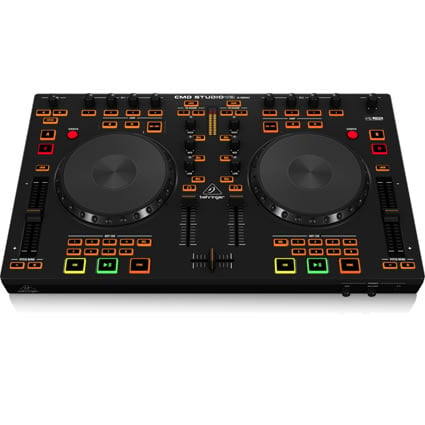 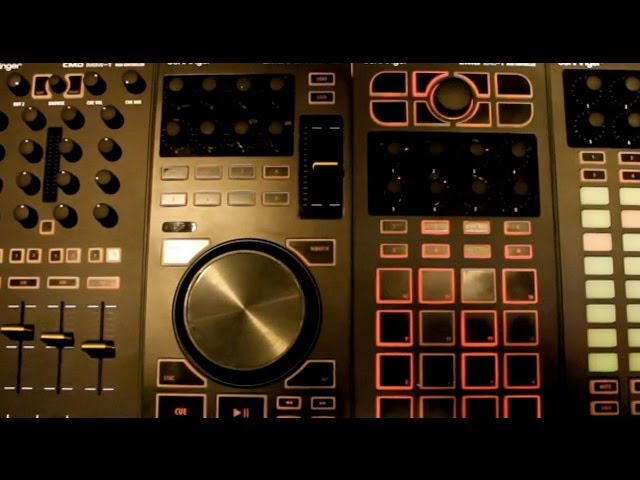 The Behringer CMD STUDIO 4A provides all the tools needed to learn the basics of DJing – or to work the dance floor into a virtual frenzy. This is no crippled budget controller; Studio 4A has the very same features you'll find on the bigger, more expensive controllers. And the Studio 4A not only includes those features – it actually improves on them.
Tiny pitch faders just feel wrong, so Behringer broke out 100 mm faders for Studio 4A's pitch controls. 60 mm channel faders translate into smoother mixes, so Behringer added those as well. Those sizes are an industry standard for a reason, right?
Another area where most controllers fall short is platter size. The trend is smaller and smaller platters, in an effort to knock the overall size of the controller down. Behringer say bigger is better, so the Studio 4A packs 6" touch sensitive platters that work the way you've come to expect coming from industry standard equipment. After the faders, the platter is your main contact point on a controller – shrinking that down to a tiny little rubber disc just isn't satisfying.
So you buy a controller and get it home, only to find out that you have to go right back out and buy a soundcard? Behringer built a 4-out USB sound card into the Studio 4A, so you're ready to go right-out-of-the-box. This high-quality audio interface has 24 bit converters and provides ultra-low latency operation in either Windows or OS X.
No one wants to look up at the DJ and see him looking at his computer screen like he's updating his Facebook page. And as a DJ, you don't want to be forced to constantly look at the computer instead of reading your crowd. The CMD Studio 4A addresses this by incorporating plenty of MIDI feedback. That means that if a button is lit in your software, it's also lit up on the Studio 4A.
It's easy to get the big stuff right, but it's the little things that usually slip through the cracks. Modern DJ software typically has between 5 and 8 hotcues, yet many controllers in the market only have 3. The Studio 4A has 8 hotcue buttons. Most DJ software is capable of running 4 or more virtual decks, so the Studio 4A can control up to 4 virtual decks. The same goes for other features, like library navigation, looping controls, EQ kills, keylock, and much more.

Seen a video for Behringer CMD STUDIO 4A ? Send us the URL and published videos will receive loyalty points!

Do you own the Behringer CMD STUDIO 4A ? Why not write a review based on your experience with it.
Write a Review
1
0
0
0
0
Richard
Exelent
the behringer cmd studio 4a is a great midi controller. I have had one for a year now and it works perfectly when creating remixes. 5*
HelpfulNot Helpful 0 found this helpful

Behringer CMD STUDIO 4A
from £/month
×