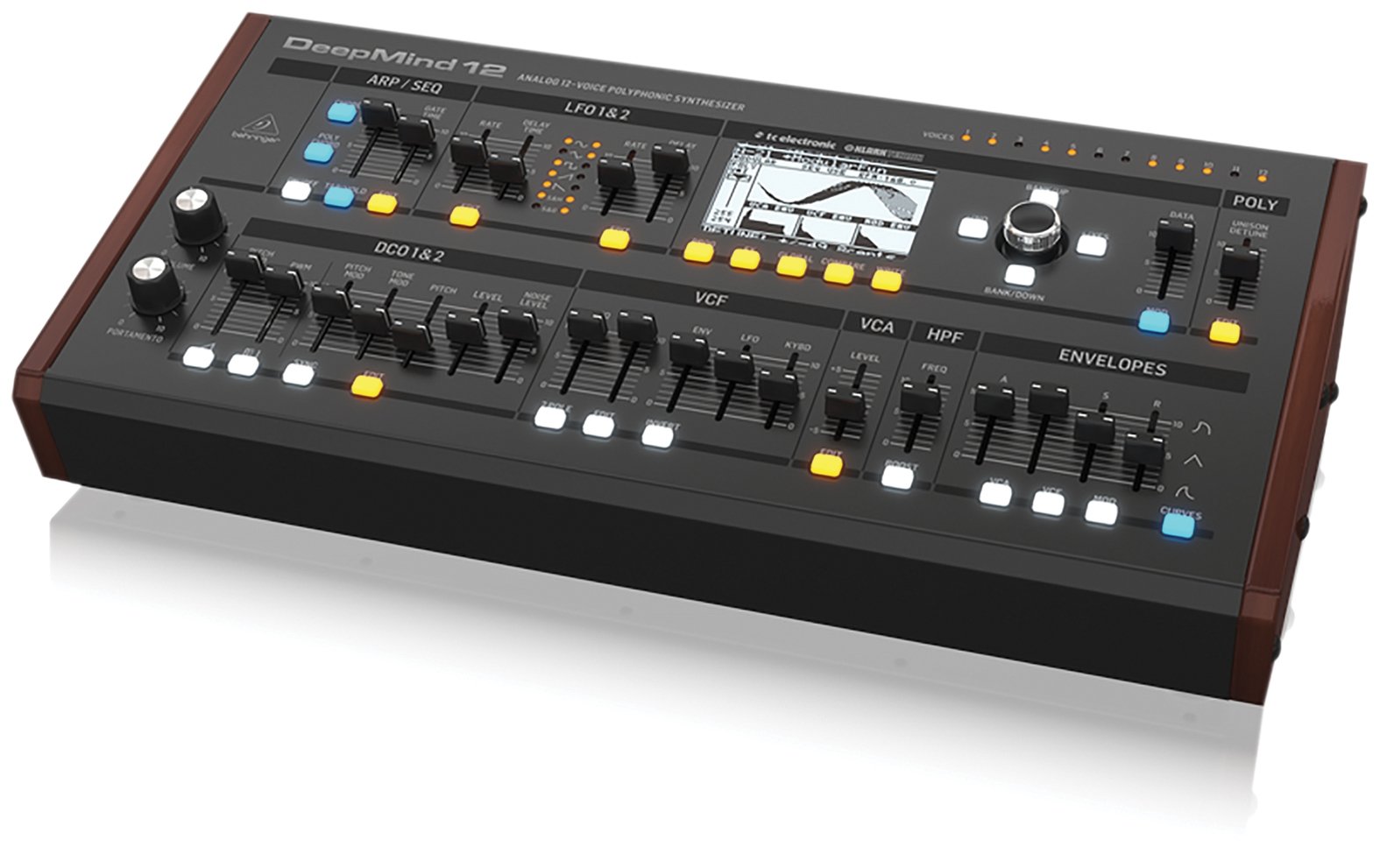 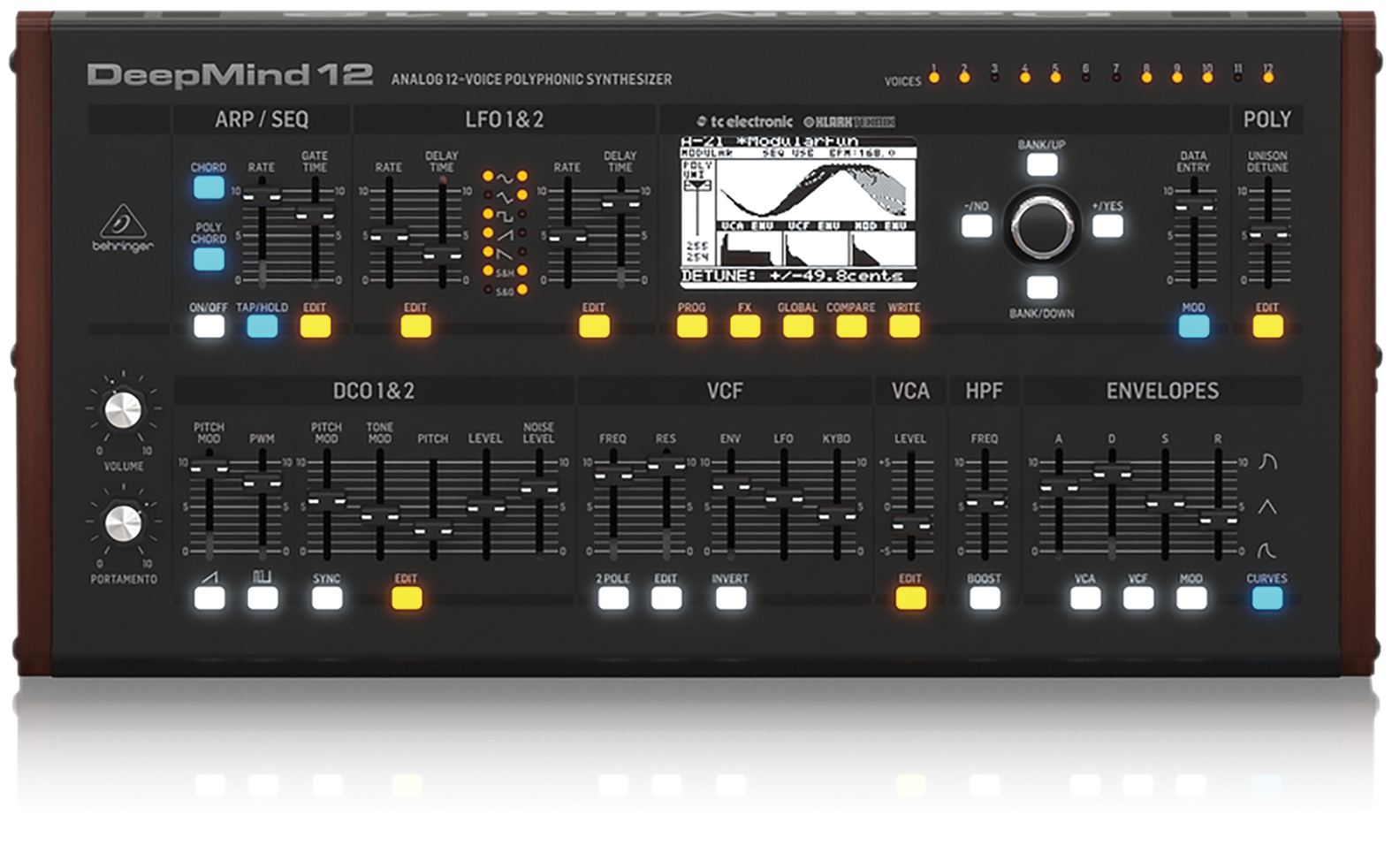 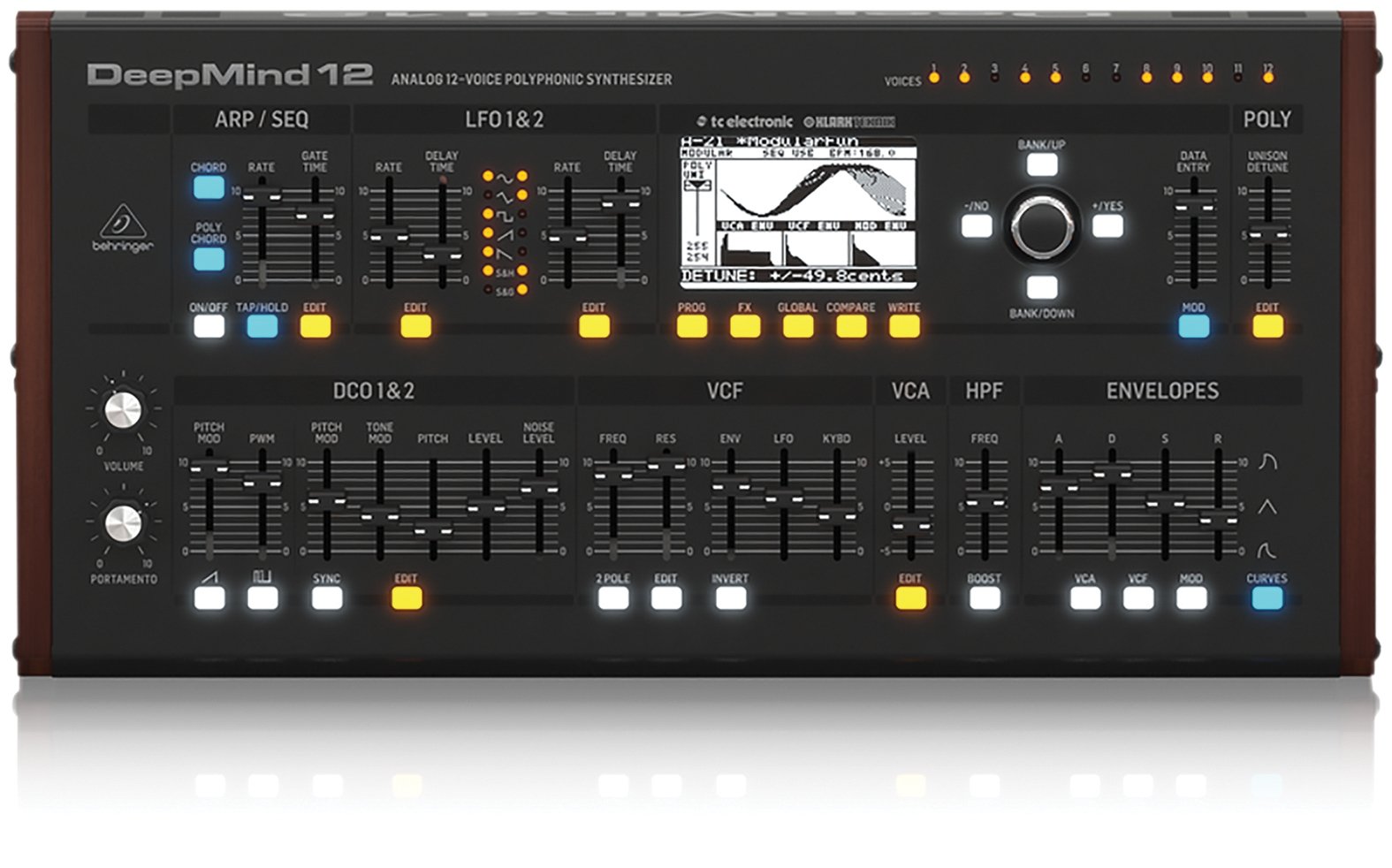 Behringer Deepmind 12D Special Offers When bought with this product

With the creation of the DEEPMIND 12D, the ultimate true analogue, 12-voice polyphonic synthesizer in a convenient desktop or rack mount format is finally a reality. DEEPMIND 12D allows you to conjure up virtually any sound you can imagine with unparalleled finesse and ease. Thanks to its 4 FX engines, dual analogue OSCs and LFOs per voice, 3 ADSR Generators, 8-Channel Modulation Matrix and on-board 32-Step Control Sequencer, the DEEPMIND 12D gives you complete control over your soundscape. Plus, DEEPMIND 12D features comprehensive remote control via iPad*/PC/Mac and selected Android* Apps over USB, MIDI or built-in Wifi for a custom-tailored workflow that lets your creative spirit soar to new heights.

The inspired synthesizer tracks laid down in the 1970s and '80s are etched in the annals of progressive rock and pop music forever, making them truly classic in every sense of the word. DEEPMIND 12D's pure analogue signal path with legendary IR3109-style VCFs, stereo VCAs, and 12-voice polyphony lets you recreate all that magic or design the powerful, original sounds that just might make you a legend in your own right.

We also included 4 simultaneous FX engines with over 33 world-class TC ELECTRONIC, MIDAS and KLARK TEKNIK algorithms including Reverb, Chorus, Flanger, Phaser, Delay, Multiband Distortion, and many more. Custom-designed and physically modelled after some of the most iconic and sought-after processors, DEEPMIND 12D's FX were essentially 'rebuilt' in the digital domain and put right at your fingertips. All effects run inside the low-latency environment of the DEEPMIND 12D, ensuring flawless performance and flexible routing. TC ELECTRONIC is synonymous with some of the best sounding reverbs found anywhere. The TC DEEP REVERB provides 9 iconic reverb modes you know and love in tone effect that sounds insanely good. It's amazing that just 4 controls (Decay, Tone and PreDelay) provide such a wide range of tonal options bright and springy, warm and bouncy, or gigantic dark reflections. All that and then some!The Lexicon 480L* has been recognised as the gold standard of digital reverb, and we have included five of the finest reverb models: HALL, AMBIENT, RICH PLATE, ROOM and RICH CHAMBER. These models precisely capture all nuances based on our 'True Physical Modelling' and our algorithms even incorporate the units AD/DA gain stepping converters nailing the entire analogue and digital circuit paths, right down to the last detail. (Inspired by Lexicon 480L*)

Seen a video for Behringer Deepmind 12D? Send us the URL and published videos will receive loyalty points!

Do you own the Behringer Deepmind 12D? Why not write a review based on your experience with it.
Write a Review