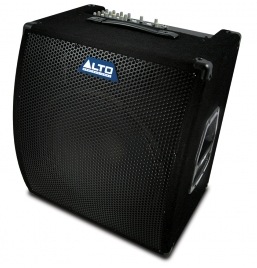 Imagine a keyboard amp that's been designed with the same passion, attention to detail and enthusiasm as today's leading guitar and bass amplifiers. That's the Kick15.

The Kick15 represents a new and more powerful amplifier design for keyboardists, drummers and those needing a personal PA. You get 400 Watts of peak power in a true bi-amped design with a custom-tuned electronic crossover, an integrated four-channel mixer and built-in Alesis effects. Just like Alto Professional's industry-leading TRUESONIC loudspeakers, the Kick15 is a fine-tuned performance-hungry machine. Each component has been optimized for maximum efficiency, giving you an amplifier that sounds amazing, is lightweight, and has everything you need without the filler.

A KICK IN THE PANTS
When it comes to raw power, the Kick15 isn't messing around. Unlike tired amp designs that recycle the same outdated technology, the Kick15 incorporates modern circuitry to give you 400 Watts of peak power in an astonishingly lightweight enclosure. It's been designed and tuned by passionate audio enthusiasts to give you the best audio quality and power output in its class. With the Kick15, none of that massive power gets wasted. Even the speaker baffle has been designed to direct your sound with precision, holding both the woofer and tweeter at a slight upward angle to accomplish the best throw.

TWO AMPS ARE BETTER THAN ONE
At its heart the Kick15 is multifunctional. Its host of inputs and outputs, on-board four-channel mixer and built-in effects allow you to use it as keyboard amp, drum monitor, electronic percussion amplifier or even as PA system for small to medium-sized gigs. With this much versatility, you need an amplifier that's going to run efficiently and sound great night after night. The Kick15 has a true bi-amped design, giving its 15" LF woofer and 1" HF driver each their own dedicated amplifier. Neither gets overworked and neither gets neglected. You hear every frequency, clean and crystal clear.

FREQUENCY FANATIC
Anybody can throw together an amplifier with off-the-shelf-components and call it a day. At Alto Professional, we build the gear that we want to use, and we don't want just any crossover hacking up your signal path. The Kick15 employs a handpicked, custom-tuned crossover that splits your signal with razor-sharp precision and doesn't get in the way. No highs overworking the woofer, and no lows getting lost in the tweeter. Just clean and crisp sound at every gig.

BUILT-IN ALESIS DSP
Experience premium effects without the fluff. The Kick15 comes packed with 16 genuine Alesis effects, including delay, flanger, chorus and multiple reverbs. Each effect has 16 different variations, giving you a total of 256 effect presets to choose from. A footswitch input allows you to activate or bypass the effects channel instantly while you perform (footswitch not included). FX Level controls are located on all four channels, allowing you to dial in just the right amount of effect on each channel.

The Kick15 from Alto Professional is a reimagining of what a keyboard amp should be, built from the ground up. Massive power, essential capabilities and precision-engineered components come together to give you amplifier that sounds and performs better.

Seen a video for Alto Kick 15? Send us the URL and published videos will receive loyalty points!

Do you own the Alto Kick 15? Why not write a review based on your experience with it.
Write a Review